Reviewed by: per Concordiam Staff

In February 1945, U.S. President Franklin Roosevelt met King Abdulaziz Ibn Saud of Saudi Arabia aboard a U.S. warship in the Suez Canal. Roosevelt, on his way home from the historic Yalta meeting with Churchill and Stalin, cemented an alliance with the Saudi king that would define a post-World War II geopolitical and economic order based on energy-fueled industrial production. Bruce Jones and David Steven, both foreign policy senior fellows at the Brookings Institution, open their book The Risk Pivot: Great Powers, International Security, and the Energy Revolution with this story to exemplify this new era in geopolitics, energy and international economics. The authors posit that, 70 years later, the world is now entering a new transformational period. 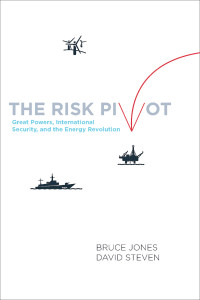 This transformation is focused on the rise of the world’s new emerging powers, many of them in Asia, and takes a hard look at how energy insecurity is fundamental to Chinese and Indian foreign policy. The authors note that “Asia’s appetite for resources comes with a cost. As energy flows to the region’s emerging powers –– China and India in particular –– so does risk.”

Risk Pivot views the challenges and opportunities of a transforming international energy system primarily from the United States’ perspective. But these issues are applicable to the entire world, and the book addresses current and historical management of energy risk with a special focus on Europe, China, India and Africa.

The rise of Asian economies is the first of six primary themes. The second and third examine, respectively, how the alternative energy revolution in the U.S. has improved its energy security and how that improvement offers the U.S. expanded strategic options. The fourth theme is on the impacts of the energy revolution on developing nations –– what the authors refer to as the “rising middle”–– –– especially newly resource-rich nations in Africa and elsewhere. It points out that an abundance of resources is not always an unmitigated blessing for fragile or politically unstable states.

The fifth theme, a common thread that runs through the book, is climate change and how it will affect the transformation of world energy usage, the environment, economics and politics, but mostly how cooperation among all stakeholders, including traditional and rising powers, is paramount to overcoming the challenges. The sixth theme looks at global energy and climate governance and offers ideas on cooperative governance arrangements, including the creation of new international institutions to monitor and manage multinational energy and climate agreements.

Chapter 2 of Risk Pivot addresses the first three themes, the energy insecurity of Asia’s rising giants and how energy innovation has improved U.S. energy security and given it new strategic options. The authors argue that, rather than use its advantages to weaken rival China’s geopolitical position, the U.S. should use its position of strength to take a leadership role in helping China (and India) manage energy insecurity. They note that, despite confrontations between China and the U.S. and its allies in the South China Sea and East China Sea, China has been a constructive partner in combating piracy off Somalia and in efforts to improve energy security in the Middle East. They encourage using cooperation in these areas to show China the “positive-sum logic” of similar cooperation in East Asia and also urge the U.S. to push China toward global climate change agreements.

Jones and Steven examine resources and globalization in Chapter 3, especially how energy competition risks destabilizing the newly developing “global middle” countries. They acknowledge the dangers of rapid economic growth without institutional and political development to match. They also look at the relationship between energy and food resources and at how past food crises have been linked to energy crises and to the “unpredictable consequences of globalizing markets.” For example, the food crisis of the early 1970s was partially caused by high energy prices driving up the costs of fertilizer and transportation, and the 2008 spike in food costs were acerbated by biofuel subsidies in the U.S. that diverted 30 percent of the corn crop to fuel production. They pay special attention to the specific challenges India faces as it attempts to transition from the “global middle” to a new economic power, and to Nigeria, the Middle East and Brazil.

In Chapter 4, the authors focus on the relationship between climate change and energy –– clearly their motivator for writing Risk Pivot. “Climate,” they write, “is primarily a geopolitical challenge, with profound implications for the world’s most powerful states and the way they relate to each other.” International progress in controlling carbon emissions through negotiations is difficult and must overcome conflict between established industrial nations, which emitted carbon freely during their high-growth periods, and nations like China, India or Brazil, which must be convinced to restrict emissions while still lagging behind in economic development.

There are no easy solutions to the climate change quandary, the authors agree, but in Chapter 5 they suggest creating a new system of international energy governance. The authors reject using current institutions, such as the International Energy Agency, because most are considered instruments of the West by the developing world; new institutions that include newly developing powers are required, they say. The proper approach should put “the private sector at the center of the strategy and implementation, with governments setting the policy framework and providing the necessary incentives and guarantees.” However, their suggested measures tend to rely on international institutional control over markets, which seems to contradict their pleas for private sector leadership.

As the authors emphasize, global problems require widespread cooperation, if not international consensus. Risk Pivot ambitiously proposes many potential frameworks for addressing problems from agricultural development to climate change, proposals that too often seem to rely on a historically improbable level of cooperation that would require nation states to look past immediate interests to achieve somewhat nebulous long-term international returns.

The Risk from Returnees