REVIEWED BY:  per Concordiam Staff 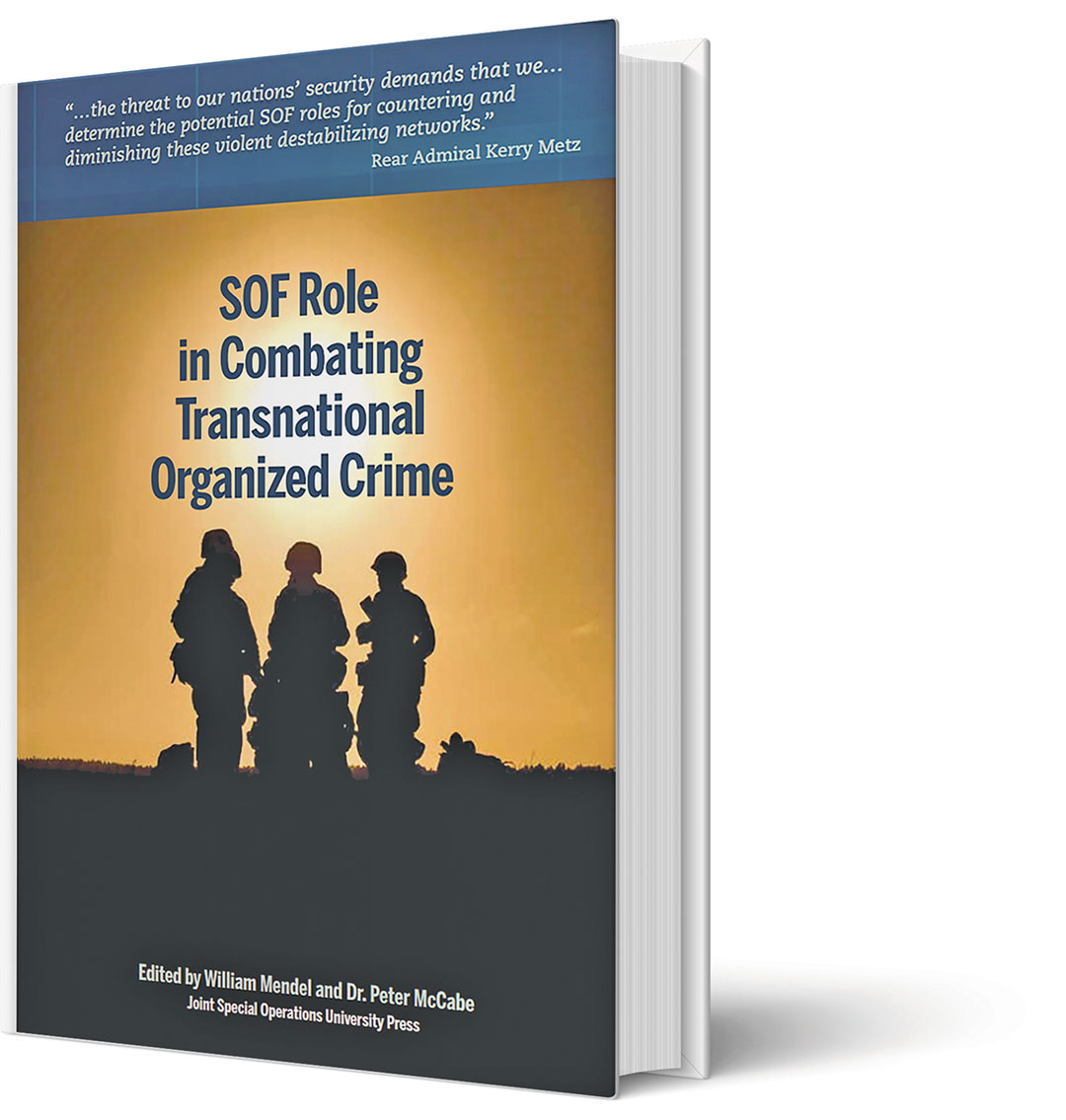 It is counterintuitive that nations should employ special operations military forces to combat transnational organized criminal activities. Fighting crime is civilian law enforcement’s job. It makes better sense, however, when one considers there are more than 52 activities that fall under the rubric of transnational organized crime (TOC) and that operate across borders, oceans and continents. TOC costs from money laundering, drug trafficking and other criminal enterprises stretch thin state resources. Some fragile states simply cannot respond effectively and inadvertently provide sanctuary to what is dubbed the crime-terror-insurgency nexus. In short, TOC is rooted in the preconditions for terrorism and insurgency and is a long-standing threat to the interests of democratic nations.

That’s the assessment of retired U.S. Army Col. William Mendel, a senior fellow at Joint Special Operations University (JSOU) in Tampa, Florida, in his introduction to a collection of 12 academic papers. They were presented at a 2015 symposium in Colorado Springs, Colorado, by military and civilian officials from Canada, Mexico and the United States who had gathered to look at TOC on the North American continent. Their findings comprise SOF Role in Combating Transnational Organized Crime, edited by Mendel and Dr. Peter McCabe and published in 2016 by JSOU Press. The contributors’ conclusions for the use of special operations forces (SOF) assets to assist states’ anti-TOC efforts are applicable to nations around the world, especially in the U.S. European Command area of operations.

It is essential to explain why SOF actually fits into fighting TOC, and Rear Adm. Kerry Metz, then commander of Special Operations Command North, provides that rationale in his foreword. He notes, “The nexus between criminal and terrorist networks is significant and evolving.” Fighting it, Metz contends, requires collectively exploring regional whole-of-government approaches to determine the potential roles for SOF to counter and diminish such violent destabilizing networks.

The book is organized into three parts — the strategic environment, policy and strategy, and operations — along with a conclusion on SOF roles and future challenges. In the first section, authors examine TOC from a regional perspective, in a seemingly borderless world, in an era of accelerating change, and according to the SOF nexus between transnational criminal organizations and transnational organized crime itself.

The chapters on policy and strategy survey strategic guidance for countering TOC, efforts to combat the financing of terrorist activities, and another nexus, this one between foreign fighters and lone wolf terrorism. In operations, the focus shifts to SOF application in borders and security.

Some contributors’ observations may seem all too obvious — and all too true. Mark Hanna, an intelligence officer for transnational threats, related how globalization contributed positively to global commerce, but has also facilitated the conditions where TOC can blossom. He concluded that disrupting a globalized criminal enterprise requires a globalized response, one that governments alone cannot solve.

Dr. Emily Spencer, director of Research and Education at the Canadian Special Operations Command, asserted that “what happens ‘over there’ more often than not impacts us ‘over here,’” because we now live in a virtually borderless world. She suggested that a global SOF network offers a potential solution to borderless threats. Such a network can aid through SOF’s ability to provide governments with dependable, credible and rapidly deployable discreet forces. These can respond to unconventional situations falling outside the capabilities of law enforcement agencies, militaries or other government departments.

Canadian Brig. Gen. Mike Rouleau, then commander of the Canadian Special Operations Command, explained that the traditional view of sovereign states with clear borders retards effective and comprehensive responses to TOC. Some states may even view TOC as benign since, with few exceptions, “TOCs are not interested in taking over the role of the state.” This view is misguided, Rouleau added, because TOC efforts to create ungoverned spaces where they can operate freely has corrosive effects on the sustainability of democratic institutions. Once a state recognizes that TOC is destructive to its authority — and survival — it might consider SOF. But, Rouleau cautioned, SOF employment must be part of a combined, joint, interagency approach that brings all state power to bear. “Despite the reality that it is best not for the military to lead (and be seen as the 800-pound gorilla in the room), too often, by default, it does.”

From there, allies can build off each other’s engagements in problem areas in the global SOF network. Such a network, in Rouleau’s words, can engender trust, but states being assisted must see themselves as part of the solution. “Very few states are willing to admit they lack the capacity to resolve their own problems.” With state buy-in, trust can grow, provided SOF operators are a persistent presence.

Dr. Celina Realuyo, who manages the Combating Transnational Organized Crime program at the William J. Perry Center, is a guest lecturer at the Marshall Center, a JSOU senior fellow and a professor at the U.S. National Defense University in Washington, D.C., explored measures to shut down terrorist financing. She stated that money serves as the oxygen for any licit or illicit activity and is the lifeblood for any TOC group. She recommended use of financial intelligence and investigation tools to detect, disrupt, and dismantle terror networks. She noted an unexpected but constructive side effect — rooting out corruption between government officials and criminal enterprises.

Canadian Professor Christian Leuprecht addressed borders and security. He illustrated a convergence between TOC and terrorism. Terrorists resort to TOC to facilitate their activities while TOC groups resort to terrorist measures to support theirs. These can manifest themselves as cross-border trafficking networks that connect brokers of illicit goods or services to criminal or terrorist groups. SOF’s ability to cross borders unimpeded provides an opportunity to infiltrate and disrupt such activities as part of the combined, joint interagency approach.

What they’ve revealed is assuredly most helpful to efforts to fight TOC, but readers will need to look elsewhere for explicit SOF angles to these counterterrorism operations.

U.S. Northern Command advisor Randy Paul Pearson perhaps recognized this in his essay, “Thoughts on Special Operations Forces Roles in Combating Transnational Organized Crime.” He calls the SOF role a “vexing one.” He wrote that the very inclusion of the word “crime” in the question would lead one to believe that this is a law enforcement matter, not a military one. But, he added, TOC is rapidly morphing into a challenge that law enforcement agencies cannot address alone.

SOF capabilities, it turns out, are not so incongruous to law enforcement protocols as one might assume. Pearson said SOF capabilities are already integrated into the best practices of business communities, operational law enforcement approaches, and in the routine modern processes of other government agencies. These specialties can be applied to existing problem sets to help align guidance and resources and identify vulnerable nodes, he said. They can protect the good guys and exploit the bad guys and possibly develop new ways to orient all elements of national power to countering the TOC threat.

SOF brings its capabilities and talents to the combined, joint, interagency table for the greater group to select what fits best for them. SOF helps interagency communications, analysis and information sharing. It also helps build a whole-of-government, information-sharing enterprise. However, Pearson assures that it will not cause the militarization of counter-TOC endeavors. “Because SOF remains in support of interagency mission partners, their application against TOC can stay well to the left of a costly full-scale war,” he said.

Michael Miklaucic, a frequent Marshall Center lecturer and director of research, information and publications at the Center for Complex Operations at the U.S. National Defense University, pointed out a most unsung virtue of SOF in combined, joint, interagency operations. Many partner states lack a collegial and congenial relationship between their citizens and their own armed forces, which are separated from the general populace to form an isolated community with their own society. “SOF are trained to work with civilians, and tap that strength, working with their counterparts to build skills required to work effectively with civilians,” he said.

None of the authors is presenting SOF as a deus ex machina to descend from the sky to vanquish TOC entities. Instead, the distinct takeaway from this volume is that because SOF offers a unique yet adaptable skill set, it can serve as a critical element in a comprehensive counter-TOC strategy. In that regard, this book delivers on its promise to survey how SOF’s role can be the proverbial “force multiplier” against transnational organized crime.  ο

What the Past Reveals