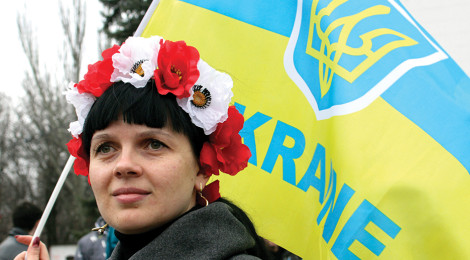 “The strong do what they can and the weak suffer what they must.” ~  Thucydides, The History of the Peloponnesian War

Following the end of World War II, peace in Europe hinged on Washington, Berlin and Moscow. NATO’s task in Europe was to keep Washington in, Berlin down and Moscow out. This was the best way to preserve peace in the European continent. Thus, the world was split, with Moscow and Washington being the strongholds of communism and capitalism, while the Iron Curtain in Europe divided the two ideologies. Ultimately, the idea of democracy prevailed, and not only Berlin, but Europe, was unified while the USSR collapsed.

When the Cold War ended, the world no longer appeared polarized. Radical ideologies and corresponding threats continue to exist everywhere but nuclear annihilation is no longer an omnipresent threat. Furthermore, the decades after the Soviet collapse were especially fruitful for European countries. Western Europe gained new markets to the east, and post-communist states endeavoured to join the European Union. One of the first actions undertaken by post-Soviet states was to apply for EU and NATO membership, a goal they had nurtured for years, if not decades. In the liberal world order, it was within their rights to pursue that goal.

However, we now understand in retrospect that post-Soviet Russia did not accept the Western liberal world order and perceives the incorporation of its former “allies” into NATO and the EU as involuntary. In fact, Russia, itself, is not post-Soviet, but the last remnant of the old Soviet order. Thus, while NATO and the EU were expanding, Moscow was planning, calculating and accumulating power. Since 2014, we have been witnessing a new standoff between the East and the West, a clash between democracy and authoritarianism. But Berlin is no longer the focal point of the confrontation: The first important clash in Europe took place in Kiev, where Moscow lost the battle but managed to start a war — a war played under Russia’s rules and along its borders.

The questions we must ask is how and why did it come to this? And what about Ukraine? I would argue that, since this is a Cold War scenario, Cold War-thinking is required. Another name for this is “realism.” However, the more important issue to comprehend is the difference between what the two sides have to offer Ukraine and other post-Soviet states. This is where Thucydides comes in, as he successfully distinguished between hegemony and arkhe, terms that we tend to use as synonyms nowadays but in the ancient Greek language mean completely opposite things. (Arkhe is the root of monarchy, anarchy and many other words.)

The realist school is based on the concept of power; more power means more security, and since states are the main actors, they are the ones who pursue it. Thus, states habitually strive for relative gains, because they can never be certain of the intentions of other actors. In the context of the Cold War, more power and influence for the U.S. meant less for the USSR; more allies for one side meant fewer for the other. This is best illustrated in Thucydides’ The History of the Peloponnesian War, and more specifically the “Melian Dialogue” within the book. 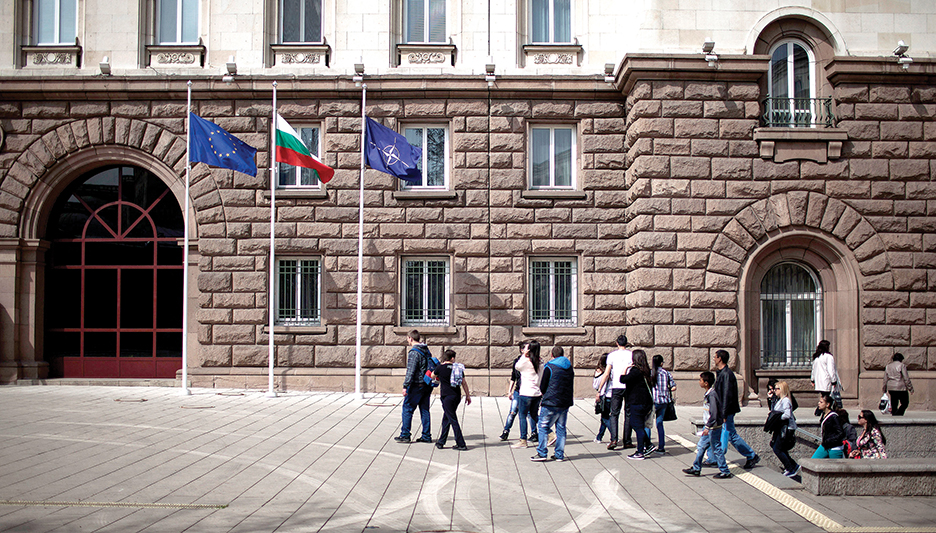 People pass the flags of the European Union, Bulgaria and NATO in Sofia after a ceremony in April 2014 marking the 10th anniversary of Bulgaria joining NATO. The former Soviet satellite was just one of many that pursued NATO membership after the Cold War. REUTERS

Thucydides’ history describes the decline of Athens’ hegemony into a failed arkhe. Here it must be emphasized that there are striking differences between ancient Greek and modern English understandings of hegemony. In the 20th century, we came to understand a hegemon, be it a global or regional one, as a state that cannot be matched in terms of military capabilities, a state that was omnipotent. However, for Thucydides, the correct term for this overwhelming sense of power was arkhe, not hegemony. During the Cold War, the Soviet Union exercised arkhe, or control, over the Warsaw Pact countries. Throughout the Cold War era, states that wanted to defect from the Soviet bloc were confronted with military power as soon as they took actions to do so — tanks rolling down their streets manifesting the “right of might.” On the other side of the Iron Curtain, Western European countries did not challenge the U.S. Perhaps if they had tried, they would have been confronted by U.S. power, but they did not need to do so. The free world was full of individual rights, political liberties and blue jeans, in other words, U.S. hegemony.

Thucydides carefully and precisely distinguished between the two forms of influence. For Greeks of the fourth and fifth centuries B.C., hegemony was associated with time, which itself was the gift of honor. Time was bestowed by free consent from the Greek states and communities as a reward for achievements and was retained by consent, not force. Nowadays, we refer to this as soft power: the power of a state to attract allies and be given the right to lead. On the other hand, arkhe is the scenario in which a state conquers and occupies territory by force.

Regarding fifth century B.C. Athens, the transition from hegemony to arkhe occurred in the case of the island of Melos. Athens had enjoyed the trust of its allies, and when it needed their assistance, it was granted. However, when the Athenians began to fear the Spartans, they went to the Melians, faithful Spartan allies, and demanded unconditional surrender. The Melians tried to persuade Athens to allow them to remain neutral. However, the Athenians issued an ultimatum that if Melos did not join them, they would be conquered, stating: “The strong do what they can and the weak suffer what they must.”

The Melians refused to join Athens and were severely punished. The more important result, however, was that the Athenian Empire doomed itself. Although it continued to exist on the map, its influence was based on fear rather than respect. Needless to say, when an empire is based only on fear, a diminishment of its military capabilities spells ruin for that empire. 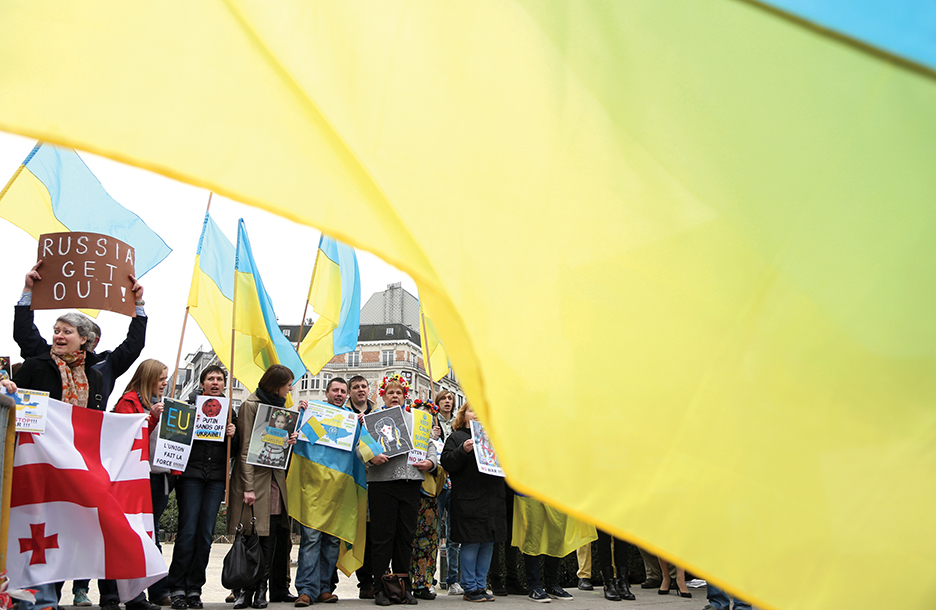 In response to Russia’s incursion into Crimea, Ukrainians living in Belgium demonstrate outside a meeting of European Union foreign ministers. REUTERS

During the Cold War, Moscow based its power and influence on fear and extortion, and once it could no longer compete with the West, the USSR fell apart and all its trusty allies turned to the West. It is the sovereign right of a state to choose its form of government, its allies and whether to participate in a union. Almost all the USSR’s republics took the first opportunity to westernize, with Ukraine remaining one of the few European post-Soviet states that is neither an EU nor a NATO member.

Russia, however, did not recognize that its neighbors had made sovereign and democratic choices by joining the EU and NATO, but viewed EU and NATO expansion as coercive and a form of arms race waged by the West. Thus, when Ukraine was given the opportunity to join the West, the country was transformed into a “new Berlin” — a place where East and West would clash again.

It is important to note that Russia has an abundance of soft power capabilities available to influence its former USSR partners — common culture, language similarities and Russian minority populations. It has been relatively easy for Moscow to wage propaganda warfare in these countries. However, once Ukraine was invaded, counterpropaganda ensued. Fear of further Russian aggression grew. Moscow’s opportunity to become a regional hegemon was destroyed by its own actions and it has no options other than to apply arkhe immediately or lose more “allies.”

The question remains: What is Ukraine’s fate? The country has fallen victim to one-sided power politics. Whether the U.S. was seeking to expand its influence in Eastern Europe through NATO is irrelevant; its new Eastern members eagerly chose Alliance membership. What is relevant, however, is how Russia viewed this expansion, and it concluded it was hostile. Therefore, to Moscow, the only option is to seek arkhe and confront the West the only way it knows how — through brute force. The Kremlin deploys its propaganda in an echo chamber: It is utterly useless outside Russia’s borders and its immediate region.

The harsh reality is that Ukraine will have to suffer for its sovereignty and liberties. In the eyes of the Russian arkhe, it is a mere relative gain that must not be surrendered to the West. What is ironic is that the EU and NATO have already won. The values represented by these entities hold too much appeal for any amount of brute force to tarnish. The separatist states newly formed at Ukraine’s expense are not capable of enduring in the contemporary world, outside Russia’s borders.

It is merely a matter of time before Ukraine becomes part of the Western hegemon and Russia’s fears become self-fulfilling and its dream of a successful arkhe collapse in upon itself.