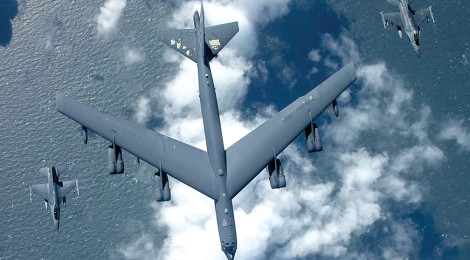 The United States Strategic Command (USSTRATCOM) focuses on much more than nuclear weapons. Its mission requires continuous planning for employment of multirole bombers to maintain a credible and capable force. USSTRATCOM is an organization with many arrows in its quiver. It exercises multiple methods to deter nuclear and conventional attacks, assures U.S. allies and partners, and supports multiple geographic combatant commands (GCC) in their wide-ranging missions.

The results of these efforts are clear. USSTRATCOM B-52 Stratofortress and B-2 Spirit long-range, multirole bombers have conducted joint and combined operations in nearly every region of the world. In addition to demonstrating USSTRATCOM’s ability to rapidly respond to threats in any GCC Area of Responsibility (AOR), recurring deployments have strengthened relationships among the U.S., its allies and partner nations. The partnerships fostered during these operations have advanced global cooperation and security, and bolstered key relationships among USSTRATCOM, the GCCs, international allies and partners. The U.S. and our global partners have demonstrated that by working together, we can achieve far more than we could separately.

USSTRATCOM bomber missions and deployments to each GCC during 2014 and 2015 have demonstrated U.S. global strike capability and capacity. The first Pacific deployment in April 2014 featured two B-52 and two B-2 bombers conducting nonstop flights from their home stations to training ranges in the Hawaiian Islands. This mission directly supported the objectives of United States Pacific Command (USPACOM) and demonstrated credible and flexible military options to meet presidential and U.S. national security obligations to U.S. allies in the region. A second Pacific deployment in August 2014 expanded on the success of the Hawaii mission with three B-2 bomber flights to Andersen Air Force Base, Guam.

These same B-2 maintenance and support crews also conducted realistic operations and support training at Diego Garcia, British Indian Ocean Territory, and flew numerous sorties throughout the Pacific. USSTRATCOM and USPACOM have demonstrated their commitment to regional security and stability throughout the Asia-Pacific region, and these flights are a visible example of that commitment.

Bomber operations in Europe are as important as those in the Asian theater of operations. The bomber assurance and deterrence mission to Europe began with a deployment in June 2014 that included three B-52s and two B-2s flying in close coordination with the United States European Command and NATO partners. This deployment provided opportunities for aircrews to become familiar with patrol procedures, air traffic control routes, air bases and operations in the region.

Capitalizing on the coordination and familiarity gained during the first mission, a second European long-range flight of USSTRATCOM B-52s in October 2014 provided opportunities to further improve interoperability with U.S. allies and partners. USSTRATCOM Commander Navy Adm. Cecil D. Haney said, “The participation of U.S. bombers in Exercise Noble Justification, which was specifically requested by NATO leadership, provides truly unique opportunities for our bomber crews to strengthen and improve interoperability with our allies and partners while working toward mutual goals. It is important that we continue to train our strategic bomber force in a variety of joint environments, to ensure we remain proficient in key skill sets and ready to respond to a variety of potential threats, 24 hours a day, seven days a week.”

In an April 2014 meeting with the House Armed Services Committee, Adm. Haney emphasized the increasing importance of such exercises when he described the global security environment as increasingly complex, dynamic and uncertain, as evidenced by recent events in Ukraine and North Korea. This year, bomber flights supporting the training mission Polar Growl demonstrated the ability to rapidly project military power while generating decisive effects. Bombers from multiple bases conducted simultaneous, long-range sorties over the Arctic and North Sea regions. These bomber missions provided a unique opportunity to train with multiple GCCs, our allies and partners in joint and coalition training exercises.

Concurrent with operations in Europe, USSTRATCOM bombers also coordinated with the United States Africa Command (USAFRICOM) to conduct missions in Africa. The ability to synchronize activities simultaneously in two strategically important regions clearly demonstrated USSTRATCOM’s capability and capacity to support multiple theaters and maintain its commitment to reassuring our allies and partners on two continents.

In recognition of the continuing strategic importance of the Western Hemisphere, USSTRATCOM also conducted important missions in South America. USSTRATCOM bombers deployed in support of the United States Southern Command (USSOUTHCOM), which sponsored the multinational exercise Panamax in August 2014. This annual exercise demonstrates the interoperability and combined training of 17 South American nations. For the first time in the history of the exercise, USSTRATCOM bomber operations provided a distinct capability as a valuable long-range intelligence, surveillance and reconnaissance (ISR) platform, which augmented overall Panamax aerial command and control. The B-52 sortie lasted about 15 hours and originated from Barksdale Air Force Base, Louisiana. Air and ground support crews integrated with forces defending the Panama Canal against multiple threats and greatly contributed to the success of the exercise.

The ISR capability that USSTRATCOM brought to Panamax highlighted that the B-52 is capable of far more than delivery of large payloads of conventional or nuclear ordnance over long distances. It is also flexible enough to integrate into a variety of mission types. The B-52 has proven to be a highly flexible, multirole weapon system.

As in other theaters, coordination with partner nations was key to the success of the exercise. In the words of Rear Adm. Benjamin Calle of Colombia, the Combined Forces Maritime Component commander: “Multinational forces have a major responsibility in protecting the Panama Canal and remaining a force in this region. This exercise is making sure that we do that by enhancing our interoperability forged through partnerships.” To this end, USSTRATCOM is continually working to improve coordination and sharpen its multirole capabilities in the USSOUTHCOM AOR.

These operations spotlight a key objective of USSTRATCOM: Deter strategic attack on the U.S. or its allies and partners wherever in the world they may occur. Friends and potential foes witnessed the scope and scale of U.S. capabilities through its strategic bomber force and are reminded of the U.S.’ strategic commitment to defend friends and allies from aggression. USSTRATCOM stands ready to rapidly execute assigned missions with flexibility and demonstrated global reach.

In the coming years, USSTRATCOM will continue to partner with GCCs, allies and partner nations to integrate planning and synchronize bomber missions. These missions have proven highly effective in support of joint and combined exercises and have greatly advanced joint and combined coordination and integration throughout the Pacific, European, African and South American continents.

← The G7 in a Multipolar World
Strengthening the Flank →