Countering extremism at the national level 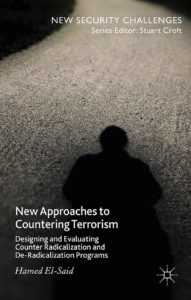 As the number of countries dealing with the threat of foreign terrorist fighters increases, the book New Approaches to Countering Violent Extremism will become an ever more important read for policymakers when assessing deradicalization programs and counterradicalization measures. It’s an appropriate second volume to Deradicalizing Violent Extremists: Counter-Radicalization and Deradicalization Programmes and their Impact in Muslim-Majority States. El-Said produces further case studies from Muslim-majority states while incorporating case studies in Muslim-minority countries such as Australia. This progression reflects the spread and increasing awareness within Western countries of the use of “soft” measures to counter violent extremism. This book serves as an insightful and invaluable guide for governments creating and reforming their counterterrorism strategies.

El-Said insists it is time for countries to stop mishandling their fight against terrorism and begin investing in soft approaches. He argues that kinetic efforts such as airstrikes and military operations encourage, rather than discourage, radicalization. In his view, the main premise of countering violent extremism is the realization that radicalization is a process and not an event. Therefore, radicalization is something that can be reversed or mitigated.

Furthermore, the book’s case studies provide an extensive history and context of each country before they share details of national strategies to counter violent extremism. El-Said insists that understanding is the key to countering the problem. There is no set program for countering violent extremism, but strategies are shaped by a country’s history, demographics, culture, population, economy and other factors. A lengthy chapter on Mauritania, for example, explains the long and undocumented history of the West African state. It’s a much-needed precursor to explain how Mauritania is dealing with violent extremism.

Beyond simply examining deradicalization programs, the book evaluates results and uses in-depth case studies to compare programs in different countries. The author uses these comparisons to make recommendations and explains why programs in one country might not work in another. For example, he notes how intensely families are involved in the Saudi Arabian deradicalization program. On the other hand, families play a smaller role in Australia. Turkey and Singapore are singled out for running successful efforts.

The author’s work is supported with strong and thorough research and interviews from officials implementing their countries’ programs, providing important information from primary sources. It is from research such as this that we learn that Australia struggled to find imams for its program. This enables further comparisons between programs in Muslim-majority and minority countries and provides guidance for countries just beginning to create deradicalization programs.

El-Said’s assertion that deradicalization comes in various national forms is confirmed toward the end of the book. For example, what one country may call deradicalization could be seen as better prison management in another country. The book makes a clear case for country-specific programs as opposed to simply applying the program of one country to another, highlighting misguided attempts by some nations to copy the Saudi Arabian model. This approach to the study and implementation of deradicalization programs provides an insightful read from which practical lessons can be drawn and implemented.

This was an excellent second volume, and further examples from Muslim-minority countries should be welcomed, not only by governments embarking on softer measures to counter extremism, but by those aiming to evolve and become more effective in countering violent extremism.