Browse: Home   /   From Calamity to Coordination 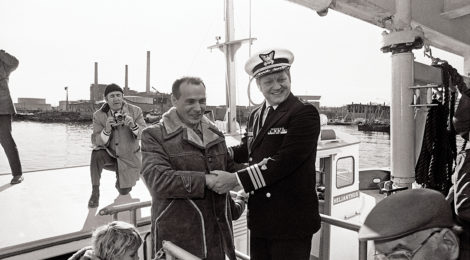 From Calamity to Coordination

A seminal event in this “whole-of-government” coordination process occurred in 1970 when Simas Kudirka, a Lithuanian sailor, sought to defect to the United States by leaping from his Soviet-flagged vessel onto a U.S. Coast Guard cutter off the coast of Martha’s Vineyard. Resolving this situation would normally require collaboration by several ministries operating under separate chains of command. At the time, however, no documented framework existed within the U.S. to compel information sharing or synchronize decisions. A series of missteps culminated in Soviet “sailors” removing the merchant seaman from the cutter in U.S. territorial waters, with the crew of the cutter powerless to intervene.

The mishandled Kudirka event sparked transformative changes within the U.S. government to ensure timely information sharing and coordinated responses to nonmilitary events and threats. The event also resonated with Lithuanians, who viewed Kudirka as a freedom fighter. The participation of officials from Lithuania and the U.S. at the December 2016 Marshall Center program, Countering Transnational Organized Crime (CTOC), provided a unique opportunity to assess the enduring impact of Kudirka, whom the Soviets tried for treason and sentenced to 10 years in a labor camp. Senior-level diplomatic talks culminated in a Soviet decision to release Kudirka from prison after four years and he emigrated to the U.S.

In 1970, back in the U.S., senior Coast Guard officers were widely blamed for the botched Kudirka response. U.S. Rep. Samuel S. Stratton asserted, “It is obvious that the person primarily responsible for this shocking, stupid and probably very costly fiasco was the rear admiral in charge of the Boston district of the Coast Guard, who gave the order. … The longer we delay taking appropriate disciplinary action in this case, the worse we look in the eyes of freedom-seeking people everywhere.”

Eight congressional hearings, as well as executive branch inquiries, highlighted misguided individual decisions. But the primary causes of the Kudirka outcome were a lack of national-level coordination guidance, poor training and the absence of an articulated policy. These findings led to a presidential directive on alignment for intergovernmental response to nonmilitary incidents. In 2005, as part of the National Strategy for Maritime Security, the whole-of-government process expanded to include security threats as well, such as piracy, terrorism and the transport of weapons of mass destruction (WMD).

The U.S. government’s maritime event coordination process, the Maritime Operational Threat Response (MOTR) Plan, is based on the painful lessons of Kudirka’s asylum request. Mechanisms that compel information sharing and align responses present tremendous governance challenges, in part because ministries are not necessarily structured — or even authorized — to communicate and coordinate with one another.

The MOTR Plan is one of about 15 that has emerged globally since 2005 to support national-level maritime response alignment. Though these frameworks are substantively different, they share a similarity: Most don’t supplant or replace agency authorities, but instead support synchronized responses among ministries. Characterized as horizontal coordinating mechanisms, these processes generally function under a “unity of effort” construct rather than “command and control.” MOTR, for instance, established a process to integrate multiple ministries to share information, develop courses of action, align responses, and identify lead and supporting agencies through a network of national level command/operations centers, instead of a “bricks and mortar” joint command center. A 2006 FBI Office of the Inspector General report concluded, “We believe that the MOTR’s efforts … help meet an existing policy void.”

If there is not a formal process, personnel in one agency may not know whom to contact in other agencies and may not be empowered to make a decision or even participate in a response. Information discarded by one agency may be the critical piece for another to identify a threat. Even with information flowing effectively, there may be uncertainty about whom to involve, what is unfolding and what are the next steps.

A documented framework defines agency roles and ensures information sharing across ministry lines. Further, ensuring that a government speaks with one voice represents an overarching goal. Without a structured process, the potential for uncertainty greatly increases as to which departments and agencies should be included in response planning and execution, as well as which agency should lead and which should provide support.

Discussions in a structured process, for example, could include whether to board a ship, law enforcement action for the crew/passengers, and disposition of the cargo and/or the vessel following an interdiction. Agency authorities, capabilities and responsibilities, and courses of action are addressed, culminating in a decision regarding the desired outcome. Coordination activities should seek to generate the most important outcomes — an agreed-upon summary of the facts and desired national outcome(s) — and identify uncertainties and ambiguities, assigning their resolution to participants. The response to a threat could be resolved in one coordination activity or could span several events. If utilized, the facilitator is responsible for tracking follow-through action items.

The safety/security response spectrum increasingly involves a number of government ministries, including the military, law enforcement and the diplomatic corps. More agencies are involved because threats are more complex, authorities can be more widely distributed throughout a government and the end-state is often the courtroom. Responses to a situation in which a dosimeter check on cargo registers positive or an inbound aircraft carries a passenger who may have an infectious disease, for instance, could involve multiple ministries. Moreover, combating piracy, terrorist activity, drug trafficking, WMD and migrant smuggling all have the potential to involve government agencies that operate under different chains of command, with separate authorities, separate responsibilities and separate funding.

As national-level interagency maritime threat/event response frameworks become an integral part of the security landscape, unambiguous head-of-state direction, agency support, frequent use and civility must be the norm. Other enablers include leveraging multiple agency authorities, capabilities and competencies to form a networked response; the ability to address emerging (and at times, unexpected) threats; 24/7/365 capability; documenting and distributing decisions; training and professional development for those involved in the process; engaging diplomatic officials early; and promulgating operational, implementing guidance. The focus on whole of government is emblematic of a changed security, and response, environment. The December 2016 CTOC program notably supported discussions on both the challenges and goals in developing a structured framework that achieves unity in supporting the timely identification of a threat and the aligned response.

Frequent use of the whole-of-government mechanism and workshops that bring together nontraditional participants and feature scenario-based training improve coordination implementation and build trust among participants unaccustomed to working together and lead to improved coordination when faced with actual operations. Workshops can help to:

Identify agencies within your government that could be involved in a response to transnational criminal activity, from the beginning to the end of a particular event.

Draft a definition of “whole of government.”

Describe how “unity of effort” varies from “command and control.”

Identify impediments that prevent information sharing outside a ministry (yet within government).

Identify scenarios based on prior experiences.

To achieve a timely, aligned and effective response framework, it is essential to continually examine productive responses and those that are mishandled. The mishandled cases, due to faulty communications, procedural mistakes or human error, will inevitably receive considerably greater scrutiny.

Velicka added that while he knew Kudirka’s return to the Soviets generated a negative response within the U.S., the CTOC presentation on its enduring impact was informative. “At the eighth decade of the 20th century, Simas Kudirka became for many Lithuanians a symbol of freedom, expressing the hope of all peoples to free themselves from Soviet oppression,” he said. “That this event somehow affected further U.S. interagency cooperation and that later this accident was taken into consideration was new for me.”

Almost half a century after the confused response to Kudirka’s defection attempt, governance lessons with resonance today include: the imperative of national-level guidance to align multiple agencies involved in the response spectrum; strong ministry involvement and support; frequent training and familiarization; and clearly understood implementing guidance. The challenge — and goal— is developing a structured framework to achieve unity of effort to support the timely identification of a threat and aligned response.