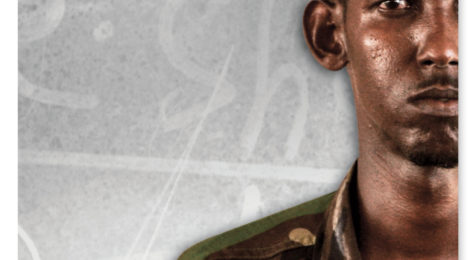 As a military officer who has spent the largest part of his career in communications and information management and operations in Uganda and Somalia — where the African Union (AU) has fought to defeat al-Shabaab for close to 10 years — I have seen tremendous efforts put forth to fight terrorism by my country and by the AU. I’m writing to strengthen an already growing notion around the world that it is high time that information operations — and indeed counternarratives — are given priority as the only remaining powerful weapon to deal with the menace of terrorism.

The East African region has been a hot spot for terrorist activities. Some of the terror groups in the region include: al-Qaida, al-Shabaab, the Allied Democratic Front, the Lord’s Resistance Army, al-Ittihad al-Islamiyah and al-Muhajiroon. All of these groups use narratives as their weapons of choice. These narratives target citizens in East Africa, the East African diaspora, the terrorists’ own forces and disengaged terrorist fighters.

Makerere University students in Kampala, Uganda, hold a vigil in April 2015 for 148 people killed by al-Shabaab.

It is evident that all terrorists are weak, while we, and other coalition forces, are kinetically strong. This presents us with the challenge of assessing from where the terrorists derive their strength. Their strength emanates from how, when and what they communicate to their target audiences. There are several examples across the world in which terrorists from al-Qaida, ISIS and al-Shabaab in Somalia have recruited and mentored their fighters simply through the power of information operations. In Barawe, Somalia, an American-born terrorist confessed to being recruited online. Additionally, over the past 10 years, captured al-Shabaab members have confessed to consuming al-Shabaab narratives, leaving them ignorant with no alternative information to rely on. This situation could be duplicated in Afghanistan, Syria, Turkey and other areas where terrorism has taken root.

Today, terrorism has heavily affected the minds, attitudes and behavior of the world’s population, be they friend, foe or uncommitted. This has ultimately determined the outcome of conflicts, leading to high levels of terrorism, jihadism and extremism. It is on this basis that the fight must either improve or shift as quickly as possible toward changing attitudes and behaviors of terrorist target audiences.

The world must accept that terrorists have been playing this game successfully for a long time. It is time that the information war is seriously reconsidered. For example, the Somali conflict is a contest of wills that has taken place in Somali minds as much as on the battlefield, targeting the attitudes and behavior of citizens. Most terrorist acts are committed based on this foundation. Al-Shabaab has fostered an environment that is permissive to terrorist activities in Somalia.

To counter such a phenomenon, the African Union Mission in Somalia (AMISOM) must not only attack and degrade al-Shabaab leadership and capabilities, but also delegitimize and counter the appeal of al-Shabaab ideology as well as address the underlying conditions that the terrorists exploit to spread extremist ideology to gain support and recruits.

For AMISOM and the Somali Army to continue shaping current peace enforcement operations in Somalia, perceptions must also be shaped to affect the will of those involved by persuading them to accept the desired outcome. Counternarrative campaigns designed to convey messages to target audiences and promote particular themes that will result in desired attitudes and behavior will go a long way in the fight against terrorism in this region, and indeed the world.

The basis for terrorist narratives

Terrorist narratives may appear implausible, but because they are tailor-made for individuals that have little alternative information, they are believed. Let’s look at just a few of the lies they spread:

• The need to reverse the marginalization of Muslims: Terror groups have worked hard to propagate the notion among the Muslim community that members are marginalized by the central government. Every government action must consider Islam first or else it is worthless.

• The need to establish an Islamic state: They continue to assure their adherents of victory and heavenly rewards. This, they say, can only be attained through a regional Islamic state that is pure and free from lesser humanity.

• The need to defeat “the Satanic Western” influence: Terrorists tout that Western powers are exploitative and manipulative, thus the need for militants to fight for the sovereignty of their states.

Over the years, the dreaded al-Shabaab terrorists have pinpointed audiences in Somalia for their precisely crafted messages. They have streamed their activities in real time and posted information or passed it on to their target audiences, using their narratives as their weapon of choice. They mainly target Somalia, the East Africa region and the diaspora. 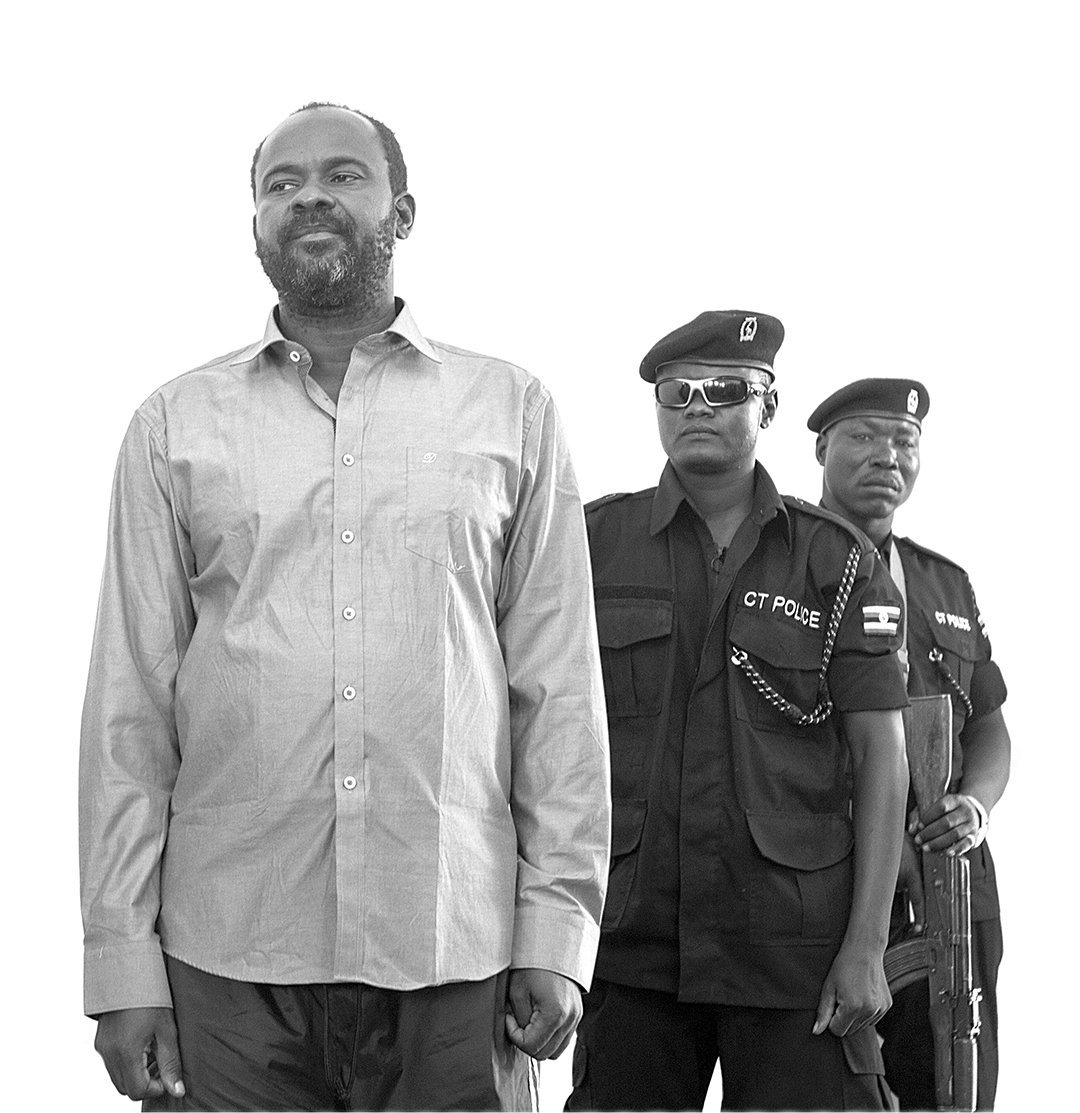 Ugandan Allied Democratic Front leader Jamil Mukulu is arraigned in July 2015 in Jinja for crimes including terrorism and murder. Uganda links the rebel group to
al-Shabaab and al-Qaida.

Their efforts mostly mobilize against the so-called infidels, who in this case are AU troops from non-Muslim countries. The language used is supposed to portray a religious fight, a sort of legitimate jihad. They divert their audience’s attention from their heinous acts and refocus them on an area that appeals to them. Such a narrative takes nonkinetic efforts to defeat, despite the fact that al-Shabaab has built it over time. To dilute terrorist messaging, counternarratives should be well-crafted and circulated in equal measure or beyond what the terrorists have done.

To a large extent, al-Shabaab has succeeded in portraying AMISOM as an occupation force. No country or individual national would feel comfortable with an occupying force on their territory. Countries that have been occupied have sacrificed all they could to rid their land of foreign forces. Such an allegation was easily consumed by al-Shabaab’s audiences and indeed did damage the legitimacy of AMISOM forces in the minds of the Somali people and the diaspora.

Religion has been widely used as a propaganda tool, not only by al-Shabaab, but by terrorists across the world. Terrorists broadcast propaganda insinuating that the global fight against terrorism is meant to destroy Islam. This narrative becomes more pronounced when terrorists commit grave acts that are anti-Islamic. They try to cover up these acts that bring shame to Islam so that their audiences do not reject them.

Narratives that focus on recruitment of both local and foreign fighters, especially using online platforms, have been the norm and the easiest method of attracting potential fighters. Today, youths access the internet and are the biggest population using social media. Consequently, they are most targeted by terrorists.

In a bid to control and refocus the minds of their troops, terrorists — especially al-Shabaab in Somalia — have not spared their own forces from their propaganda machinery. They promise heavenly rewards such as those promised in holy teachings and encourage them to fight to restore Islam. They are encouraged to fight and defeat Western influence and fake success to boost the morale of their forces. This, to a large extent, keeps fighters fighting for what is assumed to be a “just” cause.

On the contrary, those who have disengaged from terrorist activities, were captured or have surrendered are always labeled as traitors. They and their families are threatened with painful death. Such threats have discouraged former terrorists, kept them in hiding or left them in fear of their lives instead of actively participating in the development of their countries or participating fully to defeat terrorism.

AMISOM, local government troops and other participating forces, not only in Somalia but across the world, have been targets of terrorists’ propaganda.

Attempts have been made to malign African peacekeepers and governments as tools of Western nations rather than liberators fulfilling their pan-African responsibility. They are labeled as occupational forces, encouraging troops to look at their leaders and governments as selfish and fighting for an unjustified cause. In such a situation, if troops are not well-grounded and briefed, it may affect their morale and favor their adversaries.

Fake defections and captures have also been used to portray the terrorists as victorious, and even when such incidents occur, their numbers are exaggerated and widely circulated to damage morale, discourage troops and their commanders, or even erode the will of participating countries so that they might consider withdrawing their contingents. It’s no wonder that whenever AMISOM troops cause a significant number of deaths in Somalia fighting al-Shabaab, the first narrative from the media and other platforms is a call for the withdrawal of coalition troops. This line of reasoning comes from al-Shabaab propaganda and not from the home countries of the contributing troops.

As global actors against terrorism, we need to fully use media and exhaust all debates, foster community engagements and discover new ways of countering terrorist narratives. Security information operations should be used abundantly by different militaries and indeed by AMISOM. Carefully selected speakers should deny the terrorists an information monopoly over their intended audiences.

The Somalis must craft and own information through their government and security sector. All actors should participate in this counternarrative fight tailored to expose the illegitimacy of terrorist leaders and their sponsors.

The following are suggested techniques to be used with AMISOM concepts of operation to counter al-Shabaab psychological operations. They can be used individually or in combination, depending on careful analysis and factual information about al-Shabaab and those remaining in areas controlled by them; for example, to determine the populace’s general perception of and attitudes toward al-Shabaab, as well as toward the Somali government and government/AMISOM cooperative political and military initiatives.

Serious point-by-point rebuttals of terrorist narratives must be displayed online and by other means to completely discredit the message and, by implication, other messages originating from the source. Messages should be crafted so that the audience’s attention is swayed away from the issues raised by terrorists. Insulate citizens from outside influences by preconditioning them against indoctrination, and they will automatically dismiss messages from terrorists.

Based on the capabilities and resources available, terrorist narratives can easily be countered to reorient our people and neutralize those narratives. Efforts to reach foreign terrorist fighters need to focus on legal, religious, social, diplomatic and other spheres.

Finally, countering terrorism is a “war” characterized by ideas, perceptions and the mind. We often think the narratives of terrorists have been a decisive weapon for their side. These narratives are the competing story lines that, as a small country, we have attempted to counter at home in Uganda and while fighting terrorism across most of the region.

Global cooperation in countering these narratives would degrade the terrorists’ power to justify indiscriminate violent tactics, propagate radical ideologies and win over new recruits and sympathizers.