One For All and All For One 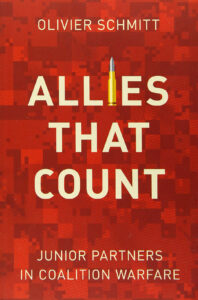 God may favor the big battalions, per Napoleon’s apocryphal dictum. But big battalions are usually more useful to commanders when filled with willing and capable troops.

Ensuring that junior partners’ contributions to coalition warfare are well-placed in the overall scheme of maneuvers is key to ensuring their presence is useful, rather than a hindrance. How those troops are integrated can prove their worth, despite their small numbers. While they probably can’t sponsor a global operation on their own, their presence alone can be sufficient to fill a military and political purpose for a given endeavor.

Olivier Schmitt, a University of Southern Denmark professor and scientific director of the French Association for War and Strategic Studies, asserts in his book, “Allies That Count: Junior Partners in Coalition Warfare,” that some junior partners may employ homegrown efforts that are more useful than what the superpower is employing. To demonstrate, the author uses a rich empirical framework, having conducted more than 150 interviews, participated in practical observation and used primary and secondary sources from four languages.

Carefully defined terms form a scaffolding for his research. He defines a junior partner as any state whose contribution is not the most important militarily (number of troops) or politically (leadership). He explores the reasons states form alliances and how junior partners affect alliance policies and strategies. Do they honor alliance commitments? Does their presence make war more or less likely?

But first, it is important to differentiate between coalitions and alliances. Alliances are long-term efforts that translate peacetime organizations to wartime, while coalitions are typically formed to counter a specific threat. It is also important to recognize that a contribution is based on more than manpower. It is false to assume that coalition leaders should simply aggregate individual members as if it were a unilateral operation. Gen. John Pershing, commander of American Expeditionary Forces in France in 1918, refused to allow American soldiers to be mere backfill for French or British militaries. He insisted they operate as autonomous, associated allies. All nations demand some evidence that its troops matter to the campaign’s objectives. Leaders must understand that coalitions are, as French strategist Adm. Raoul Castex observes, “transitory assemblies of nations brought together by temporarily shared interests on some points, but still disagreeing on others.”

Reliability also affects strategy. Specific junior-partner shortfalls in operational and tactical proficiency may hamper a mission. Bringing on a coalition partner lacking a history of military cooperation may lead to friction. When a junior partner is not able to handle multinational operations, or when equipment varies widely or a language barrier exists, integrating a junior partner may seem more trouble than its worth.

So, why would a coalition consider a partner with limited military skills? Politics, of course. A junior partner’s presence may encourage other nations in its geographic vicinity to support, if not join, a coalition. And it may provide a legitimacy of its own to the undertaking. It depends, in Schmitt’s telling, on the strategic conditions of the engagement and the junior partner’s contributions. Indeed, a tautology revolves around coalition participation. Coalitions use the numbers of nations in the coalition to lend legitimacy to an intervention: If it was illegitimate, why are so many countries on board supporting it? Hence, junior partners bring intangible benefits to a coalition operation and, in some cases, concrete political advantages.

To obtain a qualitative analysis, Schmitt examines 12 states in four cases of multilateral interventions. These cases display variations in standing, integration, responsiveness, skill, quality and utility. The four cases of coalition warfare in the post-Cold War era are: the Gulf War (1991), Operation Allied Force in Kosovo (1999), Operation Iraqi Freedom (2003), and Operation Enduring Freedom with the International Security Assistance Force in Afghanistan (after 2003). Schmitt separates four types of states involved in coalition warfare: big states with high utility, big states with low utility, small states with high utility, and small states with little utility. Depending on the mission, some small states may provide either high or little utility. Australia has stood with the Americans for more than a century, and Schmitt finds its contribution at times to be of limited utility for certain operations.

Other nations may contribute little more than a political presence. Syria in the 1991 Gulf War showed limited military utility. But its political presence proved to be huge: It prevented Iraqi President Saddam Hussein from portraying himself as a victim of Western imperialism and helped to limit terrorist attacks on the coalition. It showed that recruiting non-NATO nations to a campaign can have a direct impact on NATO. “In addition to establishing a clear benchmark for non-NATO countries to join an effort,” Schmitt writes, “it may relieve some NATO nations from even participating” in an operation if the politics at home are dicey.

Nevertheless, Schmitt’s investigation concludes that the idea of “the more, the merrier” in coalition construction must be abandoned. Some additional partners may simply get in the way if their capabilities are of limited usefulness to the campaign being waged. The legitimacy of an operation should stand on the operation itself, not on the number of nations participating. And nations whose contributions simply impede the coalition’s aims should be politely directed to contribute in a nonkinetic manner. Japan did this in Iraq.

So, yes, the big battalions may still enjoy the quantitative advantage — but it matters which units are in those battalions. For a junior partner to matter, it must bring either unique capabilities for which it is renown (e.g., Hungarian riot police) or it must establish how its participation improves the success of coalition operations.

Fortunately, would-be junior partners have a handy guide in “Allies that Count” from which they can measure the utility of their participation in a coalition campaign, both for themselves and for the coalition. The case studies make clear that just showing up is not usually enough militarily unless the partner brings a unique capability unavailable from any other nation. Determining what these are will determine the utility of bringing a junior partner into a coalition. It is about more than whether a junior partner’s participation is consequential or ephemeral. It is about how they might fit into the overall strategic objective.

Larger nations in a coalition must learn to appreciate targeted participation from junior partners and to never talk ill of such contributions. Every nation thinks it can perform a given task better than any other nation. A willingness to let a junior partner lead in certain elements where it has expertise is essential. Schmitt’s book provides a primer on how to do this intelligently and effectively.

NATO in the North