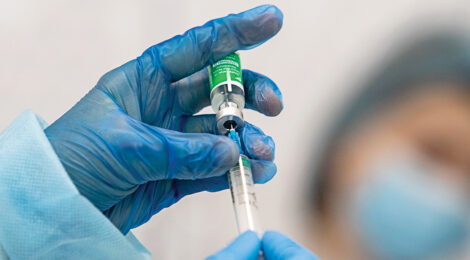 How the pandemic has affected security across the world

“This changes everything.” “This is a game-changer.” Phrases like these have abounded in recent decades in the aftermath of catastrophes, market crashes, upheavals and revolutions. Yet after a suitable period of time, most things seem to return to normal or some recognizable semblance thereof. But most of those were one-off events, significant in impact but without the power to fundamentally change our societies, governments and business models.

Not this time. Unlike many other game-changers, the COVID-19 pandemic really seems to have changed everything. Everything. And it has staying power. In the past three decades, it can only be compared to the collapse of the Soviet Union and its empire. Nothing else really comes close — not even the stock market collapse in 2008, which eventually regained its standing. This pandemic is global in its reach, but local in its effects. Nations, communities, businesses, families — all manner of social and economic constructions — have had to react to the consequences of the pandemic and its impacts. Few have been spared, due to the manner and extent of globalization extant in our world. It has devastated national economies, personal relationships and everything in between.

This edition of per Concordiam looks at some of the pandemic’s most important impacts on security. The very nature of security, particularly national security, has been affected in very fundamental ways. Consider the rise of China. Although the virus originated there, China has managed to profit from its draconian repression measures and even appears to have weathered the economic impacts of this continuing crisis, while other countries, notably in North America and Europe, have been distracted (to say the least) by the pandemic.

There is little question that the crisis has affected the focus of national security organizations worldwide and the readiness of armed forces to carry out their responsibilities. There are a number of reasons for this, many of which are set forth in this edition. In many countries, a combination of denial and lack of transparency has caused the public to lose faith or even ignore government edicts on how to respond to the pandemic. This has been exacerbated by false or misleading information shared on social media.

Another consequence of the pandemic is a loss of focus on security. People are concerned primarily about their health and about the secondary effects of the pandemic: loss of employment, loss of income, loss of personal relationships. This has understandably distracted countries from other issues, notably national security. Concomitant with this is the loss of funding for national security, particularly for the armed forces. Tax revenues used to fund the armed forces are down, and money designated for armed forces has been diverted to deal with the pandemic. This trend will accelerate as the pandemic wears on. 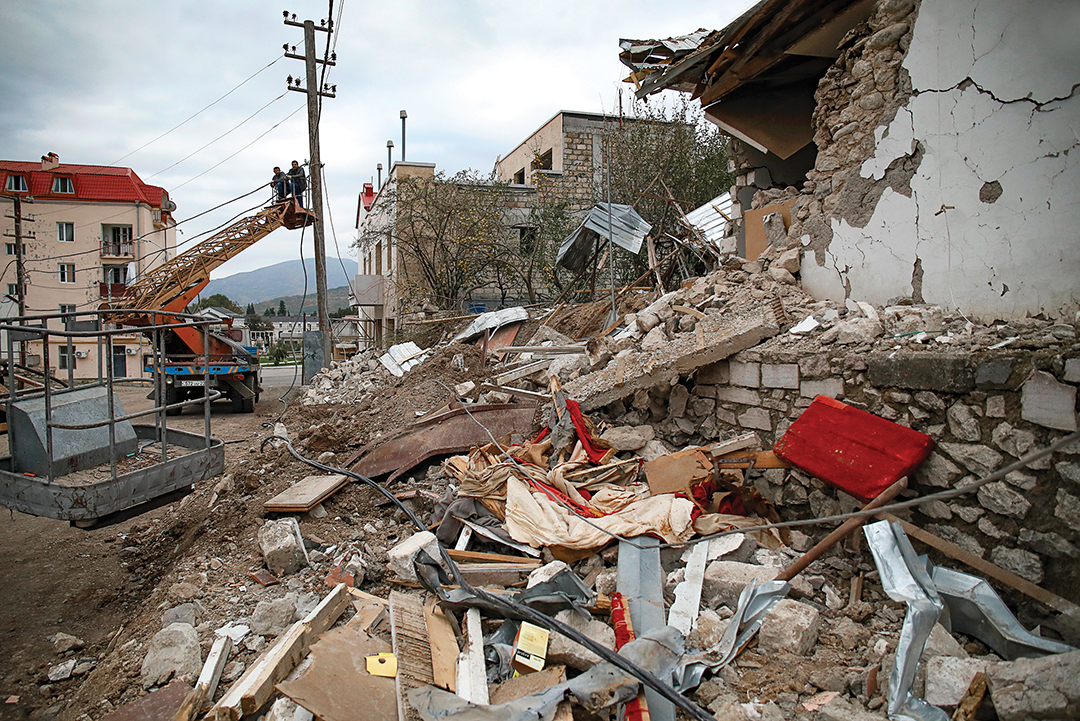 Workers repair communication lines near a home destroyed during the military conflict in the separatist region of Nagorno-Karabakh in 2020. The conflict disrupted the area’s response to COVID-19.

The pandemic’s impact on trade globalization and security alliances is also a concern. Countries are retreating from international trade relationships at a cost to other nations. Similarly, they are looking less at the value of security alliances and viewing their own security in strictly national terms. These twin consequences have significant impacts on every country, particularly those reviewed in this edition.

This edition of per Concordiam examines the continuing impact of the pandemic and the reactions and measures taken in response to it. It looks at the impact on several regions of the world that have not been closely examined in these contexts. It also looks at the impacts on decision-making and risk management in a national security context. Last, it examines the role of the armed forces in responding to this crisis.

Małgorzata Jankowska, a counselor at the Ministry of Foreign Affairs of Poland, analyzes the effects of the pandemic on multilateralism. She asserts that the crisis has accelerated the trend toward deglobalization and makes the case for a return to multilateral efforts in security, as opposed to the renationalization of security. In particular, she examines the role of the European Union, which is of particular interest in view of the challenges Europe has had in coordinating a response to the virus while at the same time managing a range of other issues, notably China and Russia. Dr. Bernhard Wigger, head of the core planning team for Swiss Security Network Exercises, looks at the issue of preparedness in the face of pandemics and other crises. He notes that nations often seem ill-prepared for such events, and he emphasizes the importance, but limitations, of crisis planning. He makes the case for risk management, buttressed by realistic exercises for crisis-response organizations.

An article that I contributed examines two aspects of this crisis on many states’ armed forces: their role in supporting civil authorities in crisis management and the impact that the virus has on the readiness of armed forces. The article lays out tasks that the military should undertake and notes many of the new roles — such as civilian-patient transportation and care — that armed forces have taken on in many countries. The risks involved in these new roles provide a cautionary tale for decision-makers when asking the armed forces to do more in response to the pandemic.

How the pandemic has affected armed forces readiness is discussed in an article on strategic deterrence that outlines the challenges and the methods used by the U.S. Strategic Command to ensure its nation’s readiness. Given that there is no room for error in the field of nuclear deterrence, this is an impressive accomplishment. 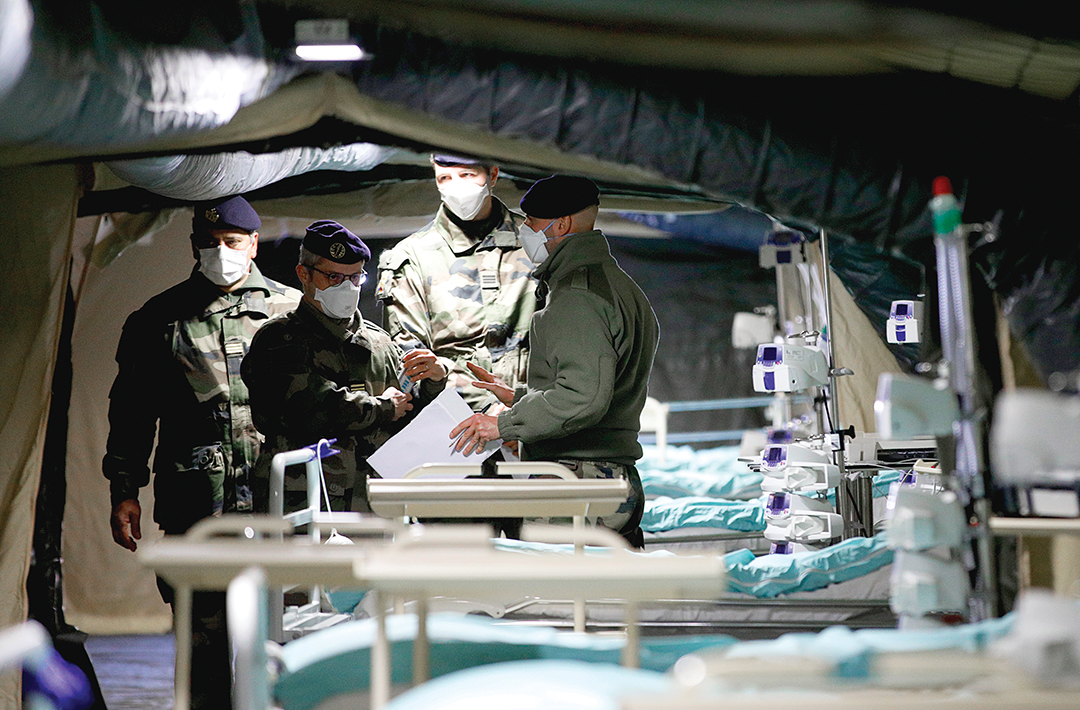 French soldiers gather inside a military field hospital in eastern France. Italy, Spain and France were hit hard by COVID-19.

Dr. Gregory Gleason, a Marshall Center professor, writes about trade issues, particularly as they relate to Central Asia. He notes how the current crisis has disrupted supply chains worldwide, and he puts these issues in the context of China’s One Belt, One Road efforts. Gleason postulates that China can capitalize on the land bridge that Central Asia offers, particularly as other means of transport, such as air travel, have been greatly disrupted by the pandemic. He points out that the region is turning to Russia and China for economic and political support.

U.S. Navy Cmdr. John “Eric” Ager, a Marshall Center professor, draws many of the same conclusions in his analysis of how Ukraine has fared during the pandemic. He notes that Ukraine’s response has been poorly received by the population because the government seems to lack direction and transparency. In addition, Ukraine has faltered in its defense reforms and in its response to Russian aggression and interference. Ukraine’s Western partners have understandably been distracted, and Russia has exploited this opening. He notes that it will require significant effort to get Ukraine back on the path to stability and reform.

Another Marshall Center professor, Dr. Pál Dunay, adds to this focus by examining the impact of the crisis on the post-Soviet space. He looks at the manner in which Russia has sought to control the crisis by extending and solidifying its sphere of influence. The post-Soviet states share a number of characteristics that influenced their responses to the crisis, including a lack of transparency, lack of efficient market structures and considerable instability in the region. He touches on the pandemic’s impact on border security and other crises, notably the war between Armenia and Azerbaijan. Mariusz Rzeszutko, a Ph.D. in security sciences, analyzes countries in the Middle East and North Africa. He focuses on the impact on Lebanon, Algeria and Saudi Arabia, which have their plates full with other internal and external issues. Similar to countries of the post-Soviet space, these countries have varying degrees of transparency issues and economic problems that limit their ability to effectively respond to the crisis.

It is natural that the focus for many in this crisis has been on their own health and work situations, but as we move into the past-pandemic world, with the virus becoming endemic, we will have to reinvigorate our relations with friends, neighbors, allies and competitors. This issue of
per Concordiam is devoted to that time, which we all hope comes sooner than later.

During the stock market bubbles of the last century, when soaring stock prices bore little semblance to their underlying value, a number of stock market analysts assured investors that “this time it is different,” meaning that the old rules no longer applied. They proclaimed a new “normal.” We know what happened when stock prices fell back to Earth. But this time, the pandemic bubble really is different — and will stay so for a long time. We need to plan accordingly.