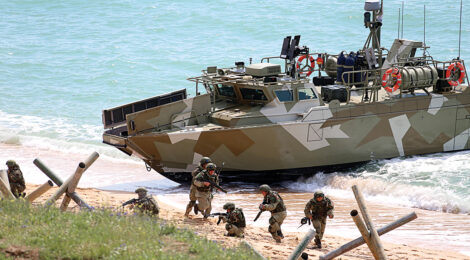 Russia conceives of itself as a great power, with Moscow as the controlling civilizational center within a geopolitical bloc, a sphere of influence that encapsulates “historical Russia.” As such, Russia has the historical duty to act as the “sword and the shield” within this space. Russia determines who is friend and who is enemy, the extent to which third-party activity can occur, and the strategic orientation of lesser, controlled states within the sphere. We can identify five fundamental drivers of Russian strategic behavior that help explain its interactions with states within its sphere: regime continuity and great power status; threat perception; ingrained imperial attitudes; ability to effectively coerce as the ultimate means of legitimizing Russian President Vladimir Putin’s political authority; and a return to messianism in foreign policy.

First and foremost, the declaration of a sphere of influence denotes great power status, which in turn legitimizes regime continuity: All politics is local and personal. Putin’s Russia uses the notion of Russia as a besieged and encircled great power, a sovereign and strategically autonomous great power with global reach, and a global player able to shape global order. As such, the Russian people can feel pride in a state that has “risen from its knees.” Russian journalist Alexander Golts argues that Putin’s own worldview is critical to how Russia exercises this role: “The world is ruled by the strong; the weak are pushed and shoved. The world belongs to the brave. If Russia has nuclear weapons, then the country’s leader can do whatever he wants. And no one will dare to object to him, even when he tells obvious lies. Why should he not tell lies, if the population under his control likes them? After all, there’s no such thing as democracy; it is just that hypocritical Westerners deceive their people more skillfully. That said, we’re doing rather well in this field also these days.”

Second, Russia’s view of space is conditioned by threat perception and strategic psychology, born to strategic vulnerability and anxiety. Russia’s strategic culture has been shaped by the indefensibility of its natural borders, resulting in a fear of external intervention and a complex dynamic between offense and defense that has characterized Russian military campaigns for centuries. Russia’s lessons from history demonstrate that it can and has transitioned from stability to collapse, disorder and anarchy extremely quickly. The sources of instability are multiple. When Russia is weak, external actors take advantage. Spheres of influence are viewed as spatial zones within which three threats should be countered: the threat that states might join foreign military alliances or, in some cases, economic blocs; the threat of the establishment of permanent foreign military bases or operations; and the threat of political interference that undermines regime stability. As a result, liberal democratic ideologies must not flourish, while authoritarian ideologies can thrive. This geopolitical sphere of interest can be imagined variously as: a Russkiy mir (Russian world), a new post-sovereign, cultural and civilizational space; a Eurasian supranational governance and regulatory framework (Eurasian Economic Union); and a militarized, imperialist, anti-Western space subject to Russian coercive control, or as the echoes of a “post-Soviet space 2.0,” based on Belarus, Abkhazia and South Ossetia, Donetsk and Luhansk, Transnistria, and potentially even Kyrgyzstan.

Third, Russia’s imperial past, ethno-linguistic ties, and the lack of clarity over Russia’s borders have all contributed to a complex relationship between Russia and its neighbors and to an unwillingness to consider its post-1991 frontiers as necessarily legally binding. Russia’s attitude toward Belarus and Ukraine differs from that toward other parts of the former Soviet Union. In Russian strategic communication, these “territories” are part of an East Slavic Orthodox foundational core of “historical Russia,” and as such, part of “one people,” one language, one history, one culture and one religion. Moscow views them as historical Russian territories, not independent sovereign states; as such, they constitute a core, nonnegotiable national interest over which Russia will go to war to prevent loss. The wider hinterland of former Soviet space has a different function in Russian strategic thinking: This is space over which Russia should have an ordered producing and managerial role, demonstrating that Russia is a center of global power in a multipolar world order.

Despite Russia’s strong historical and cultural involvement in European history, the ambivalence of its relationship with Europe has continued to affect Russian strategic thinking. In the aftermath of the breakdown in relations with the West, following its annexation of Crimea in 2014, Russia once again turned to Asia and especially to China as a potential ally to balance hostile relations with the political West. Europe’s function in Russian strategic identity is to validate Russia’s exceptional civilizational identity as a besieged fortress and alternative model. This narrative argues that Europe consists of U.S. vassal states — puppet states incapable of strategic autonomy — and that the puppet master, the U.S., is a great power. Regarding the U.S., Russia perceives that its own nuclear triad gives it parity, equality and reciprocity with the “main adversary.” The U.S. serves as Russia’s strategic benchmark and because of its own great power status, the U.S. represents for Russia a “dignified foe.” 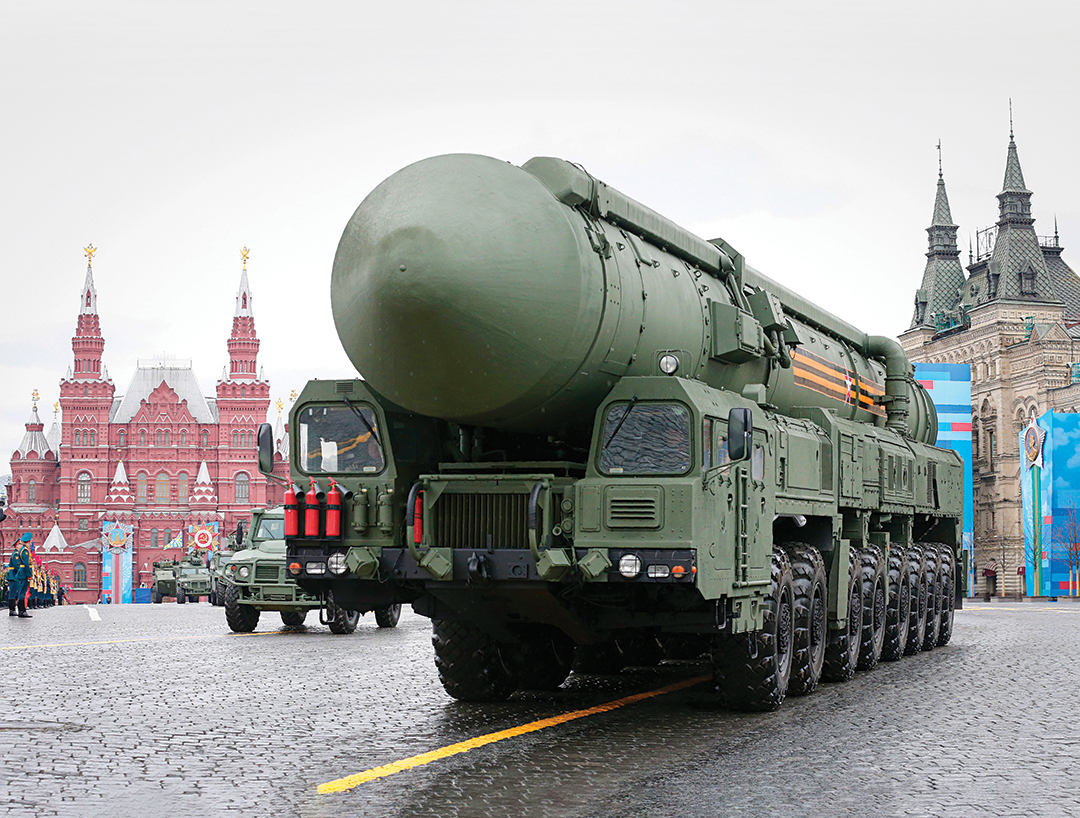 Russian ballistic missiles are displayed in Red Square during a Victory Day military parade in Moscow.

Fourth, Russian power is ultimately predicated on maintaining an independent nuclear triad and modernized conventional forces. The pervasiveness of military themes, military patriotism and militaristic policies in the state’s framing of Russianness helps forge social consensus. The role of fear in generating respect is a central feature of Russian strategic culture. Sergey Medvedev, a political science professor at the National Research University Higher School of Economics and Marshall Center faculty alumnus, contends that Russia’s most successful export commodity was not hydrocarbon energy but fear. Russia is not afraid that neighbors are afraid of Russia, it fears that its neighbors do not fear Russia. This fear of not being feared helps account for Russia’s regional hegemony and strategic behavior.

Fifth, Russian strategic culture has been characterized by a messianic element that has taken on different forms over the centuries, but continues to frame Russian military campaigns in moral and ideological language. Messianism incorporates the idea that Russia is a providential great power with a civilizational mission. Messianism surges when Russian leaders propagate its central elements. In contemporary Russian conservative thought, Russia is the biblical katechon, able to hold back and restrain the anti-Christ and delay the advent of chaotic darkness and the apocalypse. “Orthodox geopolitics” suggests that Russia is the leader of a Slavic-Orthodox world, able to promote Russian culture and values across a supranational Orthodox space that encompasses the Balkans, the Black Sea and the Eastern Mediterranean, from Serbia to Syria, within the borders of the canonical territory of the Russian Orthodox Church (ROC). This territory covers 16 states: Azerbaijan, Belarus, China, Estonia, Japan, Kazakhstan, Kyrgyzstan, Latvia, Lithuania, Moldova, Mongolia, Russia, Tajikistan, Turkmenistan, Ukraine and Uzbekistan.

Messianic ideas in religious philosophy have merged with national ideology, and the synthesis of the two is used to legitimize and justify foreign policy gambits both at home and abroad. This finds expression in the role of the ROC in Russia’s military draft, and once service members are recruited, in mobilizations and morale building through the Ministry of Defense’s Political Directorate. The ROC has a longer-term influence on conflict duration, escalation dynamics and deterrence (“nuclear orthodoxy”). Indeed, at the plenary session of the 2018 Valdai Club, Putin referenced heaven and hell in the context of nuclear deployment: “When we confirm an attack on Russia, only then will we strike back. … An aggressor must know that retribution is inevitable, that he will be destroyed. And we, the victims of aggression will go to heaven as martyrs, and they will simply perish because they will not even have time to repent.”

Russia justifies its assertion of regional hegemony with three core arguments. First, hegemony aligns with its historical role, self-identity and ontological security. Second, spheres of influence, rather than cooperation and interdependence, create balance, predictability and stability in international relations. Third, and paradoxically, hegemony at the regional level is necessary to counter U.S. hegemony at the global level. Thus, Russia asserts its own absolute sovereignty within its sphere of influence, while it simultaneously both enforces a doctrine of limited sovereignty for lesser states and posits itself as the champion of the Westphalian ideal on the global stage. The net result is that former Soviet states have become hostage to Russia’s paranoid anti-Western encirclement rhetoric and “strategic breakout” practice and to its temporizing transactional approach. Russia is caught in a confrontation syndrome in which an aggressive Russian foreign policy is an expression of weakness not strength. Its manufactured conflict with the West and manufactured consent at home provides the regime with legitimacy. As Bristish historian Robert Service observed: Abroad, Russia can be “a forceful disrupter, at home a forceful stabilizer.”