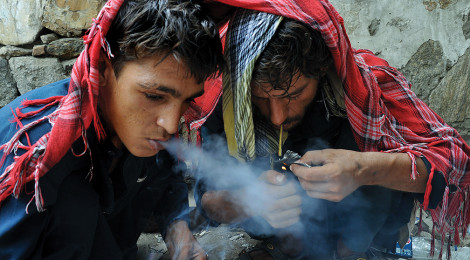 It’s been called the doomsday scenario for Afghan heroin: As Afghan military and police forces assume greater responsibility for their own national security, opium production will skyrocket with dire consequences for security in the region and the world.

But evidence is accumulating that a sustained explosion probably won’t occur, if only because the youthful populations that have driven demand for Afghan drugs are exhausting their capacity to consume ever increasing amounts of opium and its derivative heroin.

“Some may contend that sustainable counternarcotics efforts in Afghanistan are doomed,” said a joint 2013 United States-Russia study called “Afghan Narcotrafficking: A Joint Threat Assessment.” “This report, however, takes issue with a simplistic hands-off view that Afghanistan is quickly becoming … an intractable problem.”

The doomsday scenario is just one of several misconceptions experts have identified in outlining a strategy for suppressing narcotrafficking that, in its Afghan incarnation, blights the health of millions, nourishes corruption and finances terrorism. Reflecting on more than a decade of multinational peacekeeping operations in Afghanistan, experts are challenging other planks in the anti-opium campaign. 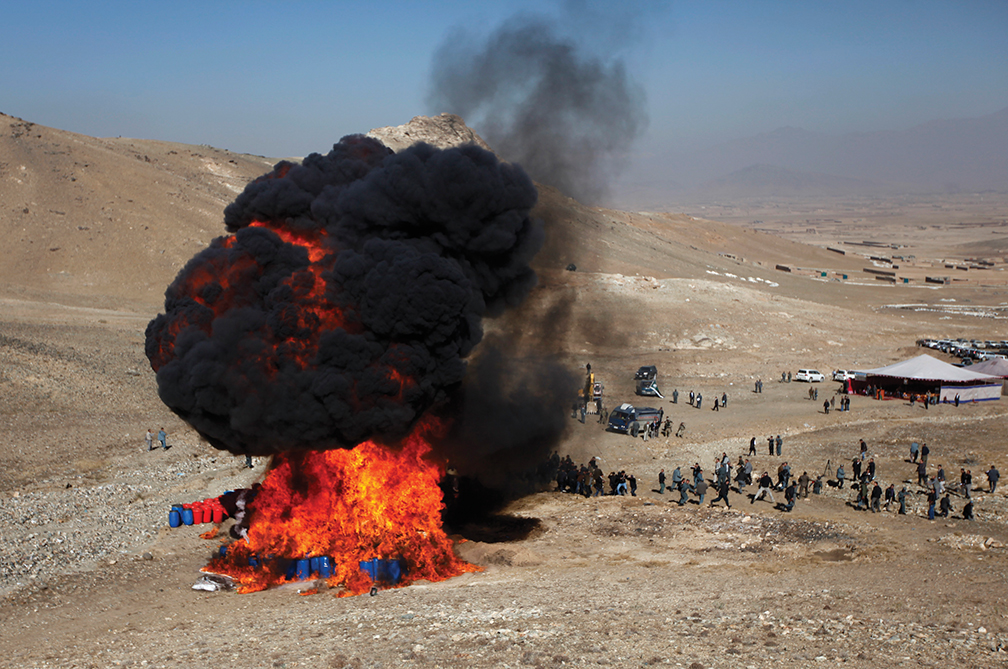 They place less faith in a single-minded focus on eradicating poppy fields, arguing that the destruction of crops in one province tends to shift production to other provinces. They question the belief that rivalries among Central Asian states preclude cooperation on stopping drugs. And they are investigating whether licensing Afghan farmers to produce legal opium for medicinal use, an experiment that has worked well in Turkey, would help build stability.

Although opium production in Afghanistan shows few signs of abating, the recent growth appears to be unsustainable. The experience of Russia suggests a reason why.

As the largest single market for Afghan heroin, Russia is wracked by addiction and diseases such as HIV linked to the use of infected needles. Heroin became cheap and plentiful just as Russia experienced an economic boom fueled by sales of oil and gas. The United Nations Office on Drugs and Crime (UNODC) estimates Russian opiate users at 1.7 million, more than 1.6 percent of the country’s population, and the number of addicts has risen by about 80,000 a year.

“It fell upon us like an avalanche,” said Dr. Ekaterina Stepanova, a Russian expert who lent her research to the Afghan narcotrafficking report.

But avalanches usually subside, and that is what could happen in Russia based on the experience of Western Europe, another large destination for Afghan heroin. Use of the drug there has stabilized or declined as the user population ages and fewer young people take up the habit.

That means demand for Afghan heroin could reach a ceiling with repercussions for the producers and traffickers operating in and around Afghanistan. Instead of being almost exclusively a consumer nation, Russia could become more of a transit nation for the drug.

Russia has pressed hard for eradicating poppy fields from the air, a technique used in places such as South America to eliminate coca crops, the main ingredient of cocaine.

But experts such as Vanda Felbab-Brown of the Brookings Institution insist that destroying fields—and thus the livelihoods of thousands of poor Afghans—tends to strengthen the bonds between farmers and extremists.

She called eradication the “single worst policy,” and insists groups such as the Taliban cynically adopt the cause of illicit opium to turn themselves into “potent political forces” among the roughly 20 percent of Afghans who sustain themselves through poppy cultivation. Poppies, the seeds of which are also used for food, have been planted for centuries in the region. “It throws populations into the hands of the militants,” Felbab-Brown said during the 5th International Symposium on Terrorism and Transnational Crime held in Turkey in December 2013.

Opium also finances those same extremists. By taxing farmers—generally considered a form of extortion—the Taliban have raised millions of dollars to wage violent campaigns against Afghan and multinational security forces.

One Afghan smallholder named Khan Bacha in the eastern province of Nangarhar told The Associated Press that extremists have demanded payment of a “religious tax” in the form of opium.

Abandoning eradication as a primary strategy shifts the emphasis to interdicting opium after harvest. Much of the focus has been on the so-called northern route that crosses primarily Tajikistan and Kazakhstan on its way to the Russian market and beyond.

An even more prolific pathway, called the Balkan Route, begins in western Afghanistan, veers south of the Caspian Sea and uses Turkey as a land bridge to European markets.

Turkey prides itself on leading the world in bulk heroin seizures, but notes that tens of thousands of its citizens continue to make a living through the illicit trade. “Drugs and corruption go hand in hand,” said Dr. Behsat Ekici, an eastern Turkish police official with firsthand knowledge of the Balkan Route.

It’s little surprise that Turkey, with ethnic ties to most of the Central Asian republics, has helped lead the way in training Kazakhs, Tajiks, Afghans and Kyrgyz in counternarcotic techniques and border security.

The Turkish International Academy against Drugs and Crime has joined NATO, Russia and the UNODC to train more than 2,000 counternarcotics officers from Central Asia and Afghanistan. In addition, the Central Asian Counternarcotics Initiative has set up anti-drug task forces throughout Central Asia to seize opium and heroin passing mostly through regional transit points.

“The resulting counternarcotics network would link both the main narcotics source country, Afghanistan, with the key transit countries in Eurasia, many of which are also becoming large consumers of Afghan-based narcotics in their own right,” World Politics Review noted in a 2012 article.

Such a counternarcotics network is needed now more than ever: Despite measures to increase effectiveness by Afghan police, military and customs officials, they still struggle to keep pace with the rise in Afghan opium production.

Turkey could provide yet another useful example to serve a global counternarcotics strategy.

The Turkish government and the U.N. oversee legal cultivation of about 35,000 hectares of poppies divided among 13 provinces. The crop services not just the legitimate market for medicine but also a demand for poppy seeds for baked goods.

Turkey recognizes that opium is one of the easiest crops to grow on marginally productive land. Up to 100,000 farmers — and by extension another 500,000 of their relatives — benefit financially from the program, the U.N. said in a report.

Most of that output is processed at the Turkish-run Afyon Alkaloids Plant and exported abroad. The U.S. pharmaceutical market is the biggest customer.

Many suggest the model is exportable to Afghanistan, where poppies are entrenched in the culture and used as tribal medicine.

But any movement toward legalization should proceed cautiously. India, which also runs a legal opium operation to supply international pharmaceutical companies, suffers from the fact that an unknown percentage of the production is siphoned off for illicit uses.

“Even if instituted, the licensing scheme would not be a panacea, and some serious problems posed by large-scale opium cultivation would persist,” Felbab-Brown wrote. “Because licensing absorbing only a part of the illicit economy could easily generate new problems, including ethnic and tribal tension, licensing should only be undertaken once the Taliban insurgency has been defeated, other obstacles to licensing have been overcome, and licensing could be implemented on a country-wide scale.”

Suppressing the drug trade in and around Afghanistan has proven elusive, but few doubt that a solution must be multinational.

Zabihullah Dayam, spokesman at the Afghan Ministry of Counter Narcotics, emphasizes that Afghanistan, which borders Pakistan and Central Asia, cannot fight drugs on its own.

“As long as we don’t have a joint regional and even beyond regional cooperation and commitments, it will be difficult for the Afghan government to succeed,” he told the Voice of America in 2013.

The alternative — narcotrafficking remaining one of the chief tools of regional destabilization — is a scenario rejected by a broad coalition of states encompassing the Middle East, Central Asia and Europe.

“The drug economy is more than just mafia cartels buying estates, businesses and aircrafts. They also buy officials, elections and parties. In a word, they buy power,” said Antonio Maria Costa, former executive director of the UNODC. “Here is where the drug industry threatens security and development.”