The Arctic Balance of Power

Forecasting regional events in the near future

The Arctic ice cap has melted significantly over the past 50 years. Such climate change not only creates challenges and opportunities in terms of changing the region’s accessibility, it also shapes a new political context in the area. As a consequence, the security landscape is being rapidly modified, and that has implications in the new strategic documents of key regional and extraregional players.

The situation is becoming more uncertain in light of Russia’s Arctic Council chairmanship. Assessing the political aggressiveness levels of the main actors can provide foresight into possible scenarios during Russia’s chairmanship from 2021 to 2023. Determination of political aggressiveness is built on analysis of primary sources of Russian and U.S. law to track the evolution of the political narratives of key regional actors’ national strategies. In turn, the scenario analysis is built on the evaluation of relations within the great power triangle — Russia, the United States and China — in the context of a melting Arctic ice cap.

China will be the key player in influencing the region’s balance of power. Now that Russia is at the helm of the Arctic Council, the great powers may explore changes in political orientation.

On March 5, 2020, Russian President Vladimir Putin adopted the new Russian State Strategy on the Arctic. With Russia chairing the Arctic Council, it can be expected that Russia’s views on and aspirations in the Arctic will have greater influence during this period. To assess Russian political doctrine on the Arctic, discourse analyses and comparisons of the former and newly adopted strategies were conducted.

General trends regarding the changing strategic orientation of Russian Arctic policy (Table 1) include: 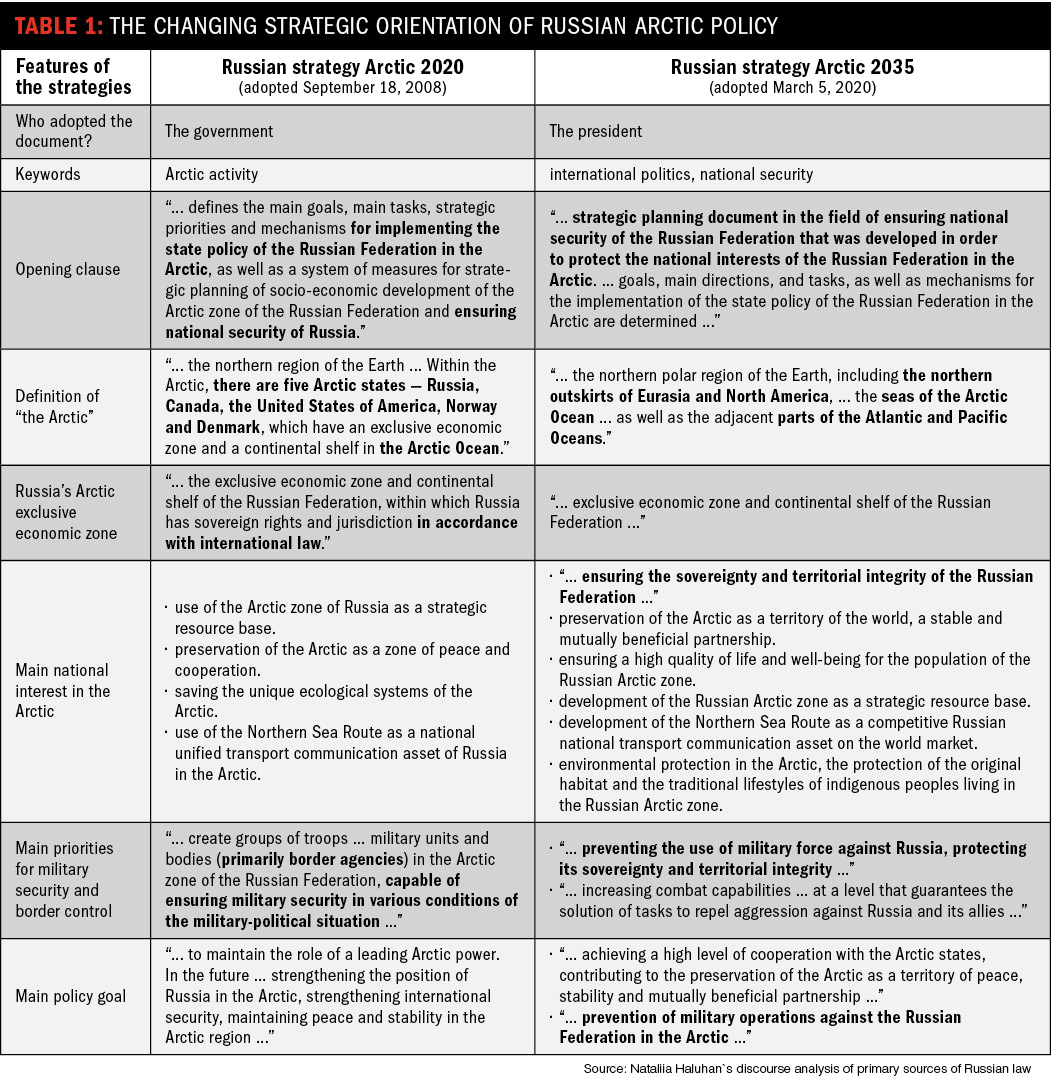 The evolution of Russian strategic narratives toward separate key issues in the Arctic region (Table 2) may be analyzed via the following tendencies:

In general, the growing importance of the Arctic to Russia may be seen through the lens of the unique opportunity it provides for Russia to become, for once, a real maritime superpower. The importance of this is pointed out by the Russian Maritime Doctrine, adopted in 2015, which voices the strategic goal to preserve and protect “the status of a major maritime state.”

Evolution of U.S. national strategies on the Arctic region

Though Russia’s new Arctic strategy shows the growing trend toward the securitization of the region, Russia is not the only regional superpower with developing ambitions. In general, the leading narratives of U.S. Department of Defense (DOD) strategies toward the warming Arctic region mirror Russia’s focus on the tightening geopolitical competition (Table 3). 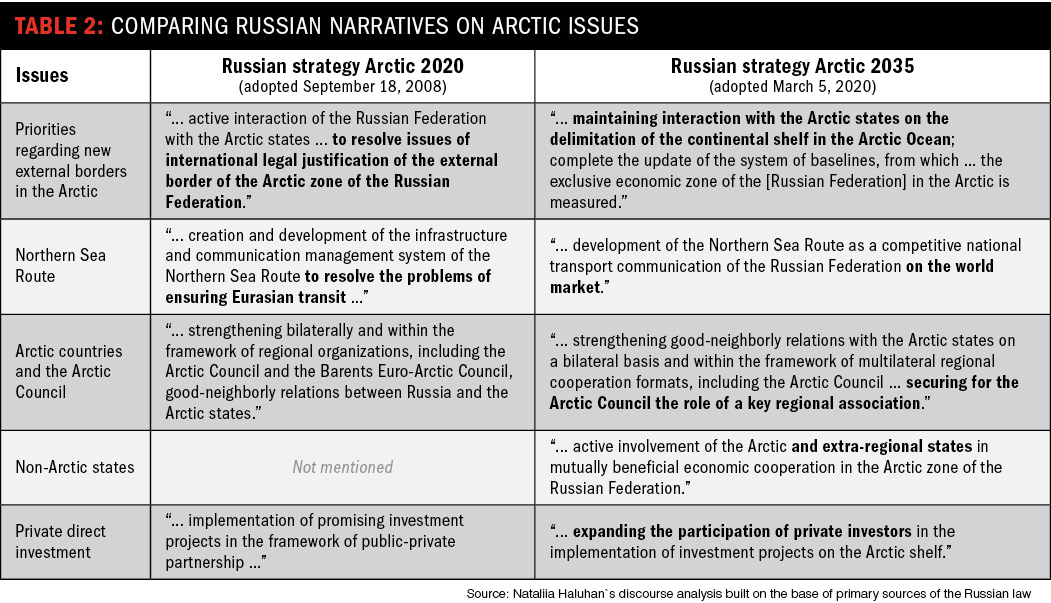 Discourse analysis of the leading narratives of the three U.S. strategies on the Arctic, introduced in 2013, 2016 and 2019, respectively, shows the intention to increase the militarization and securitization of U.S. Arctic policy. This argument is supported by the changes in DOD objectives. Thus, maintaining a favorable balance of power and the ability to compete for that are incorporated in a 2019 strategy that preserves a peaceful, stable and secure Arctic region. Against this background, the new concept of ways and means introduced by the DOD, and especially “the will to strengthen the rules-based order in the region,” may be viewed as a challenge and a readiness to engage in great power competition in the region.

The comparison of more specific issues (Table 4) provides the opportunity to analyze the challenge in detail. The evolution of U.S. national strategies on the Arctic is built on the following main trends:

The growing securitization of the Arctic region in U.S. policy may be additionally demonstrated by comparing the repetition frequency of existing geostrategic competitors — China and Russia — in the U.S. national strategies of different years. In 2013, the DOD Arctic Strategy mentioned Russia only once, but in 2016 and 2019 it was mentioned 25 and 26 times, respectively. That can be explained by worsened U.S.-Russian relations after Russia invaded Ukraine in 2014. In parallel, China was not mentioned in 2013 and only once in 2016. However, in 2019 the word “China” was used 20 times. Given that China issued the white paper on the Arctic in 2018, such growing attention from the U.S. mirrors its disagreement with the Chinese self-proclamation of special “near-Arctic state” status. 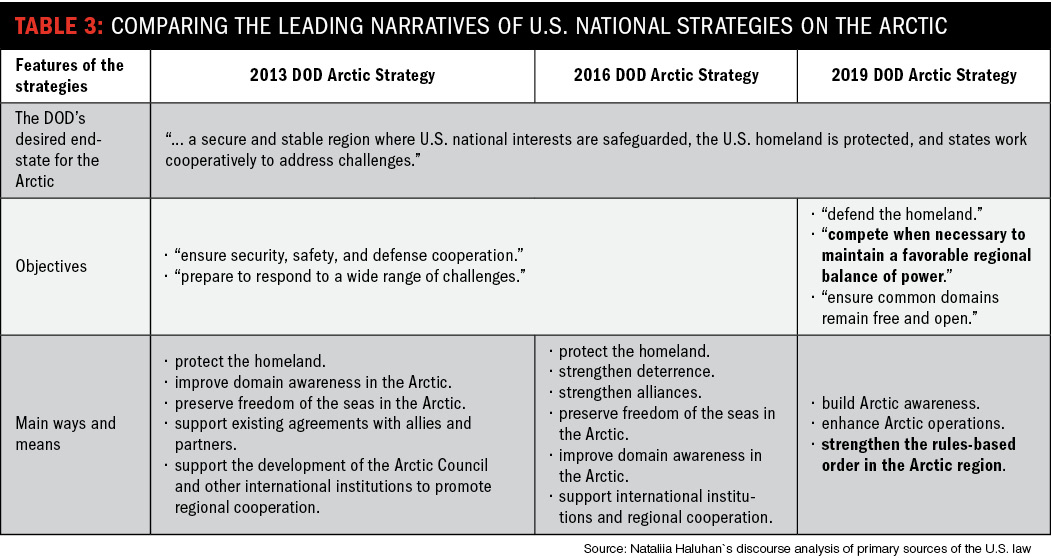 Analysis of the recent development of Russian and U.S. policies toward the Arctic shows growing securitization of the region from both sides. Given existing regional political dynamics, China’s leveraging role should be additionally emphasized. One recent example of such leveraging is that on April 24, 2020, the U.S. decided to extend economic aid to Greenland and set up a consulate in the Danish territory to counter the growing presence of China and Russia in the Arctic. It was done, first of all, as an answer to increasing Chinese investment in the economies of the smaller Arctic states.

In general, strategic forecasting of potential regional events is a complex problem. Russia, which controls the Northern Sea Route, is one of the key players in the Arctic. As chair of the Arctic Council, Russia can increase its political influence in the region. Simultaneously, the new Russian strategy regarding the Arctic accepts the involvement of extraregional countries and defines the need to attract financing from private investors. That may be seen as a consequence of the Russian-Chinese agreements on cooperation because Russia needs Chinese money to pursue its agenda in the Arctic. At the same time, the COVID-19 crisis may significantly affect preexisting plans. In contrast, the U.S. is one of the most powerful actors in the Arctic region, and it does not accept the “near-Arctic state” concept. In general, U.S.-Chinese relations should be seen through the lens of simultaneously high levels of competition and interdependence. However, tensions may change significantly after the COVID-19 crisis due to economic reasons.

Given these arguments, at the strategic level the balance of power — and as a consequence, the degree of stability — in the Arctic region post-COVID-19 and during the Russian chairmanship of the Arctic Council may be addressed through two determining factors: the level of cooperation between Russia and China, and the state of China-U.S. relations.

Given these factors, the following three main scenarios are plausible in 2021-2023: 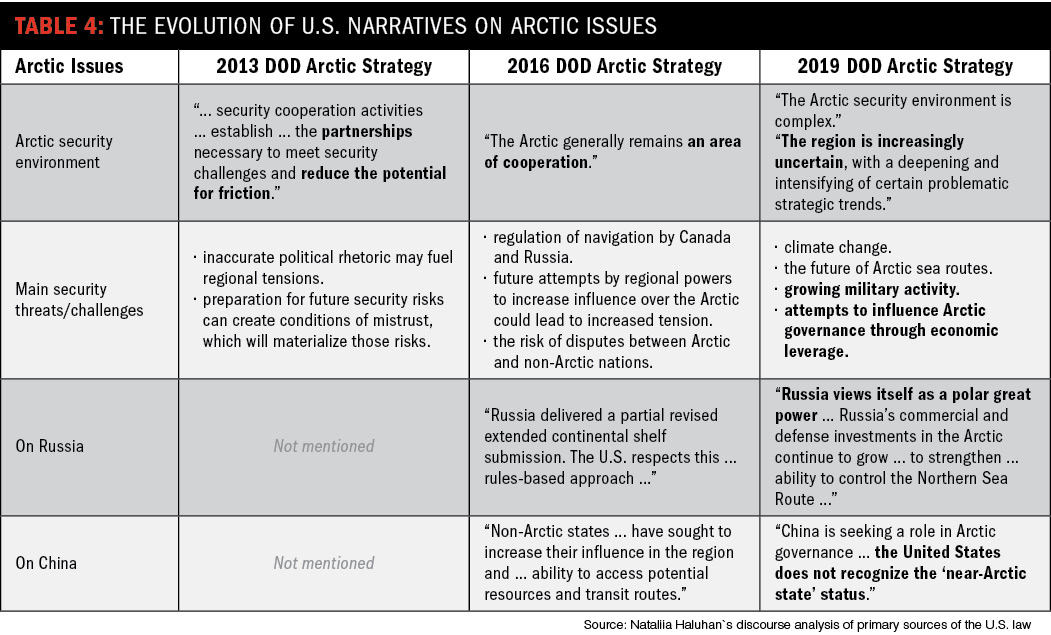 To ensure the more stable and preferable scenario, the close and growing Russian-Chinese cooperation in the Arctic should be counterbalanced. To achieve that, consider the following recommendations for the democratic Arctic coalition:

The Arctic region is characterized by the presence of two strategic rivals: the U.S. and Russia. Both are Arctic countries. Until very recently, their neighborly relations in the Arctic could have been described as a “silent confrontation.” However, due to climate change and melting sea ice, the region is receiving much more strategic attention.

In 2018, China issued its white paper on the Arctic and became the first non-Arctic state to proclaim itself a “near-Arctic state.” The U.S. has strongly opposed that concept, while Russia articulated limited support. Thus, that white paper not only gave birth to new political aspirations and a new definition but also incorporated a third great power into the regional equation. Even more important is that the Chinese political agenda sharpened the regional Russia-U.S. confrontation. These trends may be traced through the evolution of U.S. and Russian national strategies for the Arctic in general and toward the securitization of the region in particular.

As a consequence, in this analysis, China has balancing leverage, and its political aspirations are able to change the security landscape of the Arctic region in the near future.

Russia in the Arctic