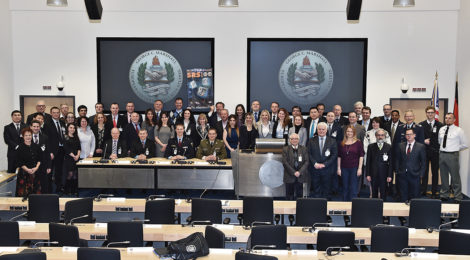 The program makes a successful contribution to regional conflict management

By The Marshall Center

“Let me remind you of the situation in Ukraine … the fight against international terrorism, and all those people fleeing war and persecution and seeking refuge in Germany. No country will be able to manage the consequences of global refugee movements, forced displacements and their root causes on its own. And no country will be able to secure prosperity and peace on its own. In the 21st century, national isolation is no longer a reasonable option.”

— German Chancellor Angela Merkel in a government statement on December 16, 2015

Even some scholars might not know the location of those places or the context in which to place those forums. Diverse and complex as these forums are, they have all been created to solve the world’s protracted conflicts and crises.

The causes and consequences of conflicts, as well as the mechanisms of conflict management, are subjects of great concern to the international public. Conflict and crises, in even the remotest corner of the world, may have a direct impact on our lives. On the internet and on TV, we are confronted with pictures from Idomeni, Lampedusa, Lesbos and Aleppo. We experience the consequences of conflicts and the attempts to solve them whenever we meet refugees from civil wars in the pedestrian zones of our capital cities. With each terrorist attack, we become victims of crises; we change travel plans and find our personal freedom of movement restricted.

Due to rapid spillover, local conflicts escalate quickly, often posing a threat to the very existence of states and impacting entire regions with far-reaching, destabilizing consequences. Of particular relevance are the conflicts in Ukraine, Syria, Iraq and Libya, of which Europe has felt the consequences. After the end of the Cold War in 1989, Europe was under the illusion that improving conditions would lead to an environment of security and order. Today, our politicians struggle to find a common approach to the erosion of political stability in Eurasia, North Africa and the Middle East, and to the global refugee crisis.

So, why are these local conflicts erupting now, and what are their regional impacts? What possible approaches could contribute to solving these conflicts? These questions are the focus of the Marshall Center’s Seminar for Regional Security (SRS).

The urgent need for such approaches was expressed by Keith Dayton, the director of the Marshall Center, in his welcoming address to the SRS 2016 participants: “Local conflicts don’t stay local. … Don’t fool yourselves into thinking that it won’t get worse, because it will. You will learn that the military doesn’t solve regional conflicts. They are solved by people like you in this room.”

The SRS was created to help participants understand the nature of conflicts in their regional contexts, and to learn about the mechanisms and timelines of effective conflict management, particularly the abilities and limitations of international organizations and nation-state actors. Every year, around 50 participants from different nations are invited to delve into this set of problems.

The seminar begins by developing a common understanding of the nature of security, crisis and conflict, and conflict management. The second module focuses on a systematic analysis of past and ongoing regional conflicts. Participants then move to a third phase, an extended exercise on “international peace negotiations,” which is based on a genuine regional crisis.

SRS participants do not enter these negotiation exercises unprepared. Before the start of the peace conference, negotiation strategies and skills are taught and practiced. High-level experts provide background information on all local, regional and even international parties to the conflict.

The participants form conference delegations, develop a negotiation strategy, and then enter a tough bargaining process trying to convince others of their position. Ideally, the outcome will be an agreement in the form of a joint communiqué, the “Garmisch-Partenkirchen Accord,” which states how the parties intend to solve the conflict.

Throughout the SRS, Marshall Center professors offer support to participants. High-ranking experts and speakers lecture on topics relevant to understanding and managing conflicts, and finally, the simulation peace conference takes place under the guidance of an internationally experienced chief negotiator.

In 2015 and 2016, the SRS was run in two iterations and discussed solutions to the current conflict in eastern Ukraine. Because the SRS approach focuses on analyzing conflict management from a regional, real-world perspective, the position of almost every party to the Ukraine conflict was represented by a high-ranking guest speaker.

In 2016, Oksana Syroyid, vice speaker of the Ukrainian parliament, and Ihor Dolhov, Ukrainian deputy minister of defense, represented their nation’s point of view in addressing course participants. The Russian viewpoint was presented by a highly qualified representative of a peace institute in Moscow. Geoffrey Pyatt, then U.S. ambassador to Kyiv, spoke from the U.S. perspective. And finally, Dr. Antonio Missiroli, head of the European Union Institute for Security Studies, explained the EU’s view of the conflict. Concluding remarks were made by the German defense attaché to Kyiv and a German representative of the Organization for Security and Co-operation in Europe (OSCE) delegation, who spoke about the intended course of action under the German OSCE chairmanship.

In addition to high-ranking experts explaining various national interests relating to the conflict, it is important to include experienced mediators for a conference to be successful. In 2015, Przemyslaw Grudzinski, the Polish ambassador to Helsinki and former head of the Polish OSCE delegation to Vienna, served as mediator. When the exercise concluded, he offered the following assessment of the seminar in a follow-up interview with the George C. Marshall Center (GCMC):

“The GCMC has opted for a highly interesting and very ambitious exercise to make participants from 28 countries which are very different in nature discuss the most urgent problems of European security. … The Marshall Center and its creative team try to address security problems in Europe before things get really ugly. We cannot simply say, ‘Ok, so the dream of Euro-Atlantic security is over. Time for a new confrontation.’ I think we need to maintain our vision of stability, security and peace on the continent. And the Marshall Center is the very place to think through different options and elaborate ideas. The GCMC has an excellent reputation as a platform for the free exchange of ideas and forward-looking thinking for the benefit of everyone with an interest in European security.”

In 2016, the Marshall Center enlisted the support of another mediator with vast experience in peace negotiations: Marian Staszewski, special representative of the OSCE chairperson-in-office for peace talks on the conflict in Ukraine. At its conclusion, he praised the seminar’s high degree of professionalism and was particularly impressed with the opening statements made by the four negotiating parties’ heads of delegation. “The negotiations and discussions here in Garmisch are much more rational and much less emotional than the usual talks of the Minsk process. Some people say that the difference between Minsk and Garmisch lies in the fact that here the power of arguments is stronger than the arguments of power.”

Seminar participants were very pleased with the seminar’s success and, most important, with their new insights into conflict management. They told the Marshall Center that experiencing what it means to be a member of a national delegation and to actively negotiate in a peace conference exercise offered valuable insight into the process of conflict management. Here are some post-seminar comments from participants:

“The fact that we — the seminar participants from many very different nations, including countries that are at war at the moment — can get together in this place helps us develop an understanding of the positions and the motives of all parties concerned. … To know somebody also means to understand them better.”

“We are all running the risk of looking at conflicts from our usual point of view. … We never really think that the solutions offered by the parties directly involved in the conflict are often the ones that can actually put an end to the conflict.”

One participant emphasized how important seminar discussions and the in-depth examination of regional conflicts are:

“The Marshall Center is our melting pot, the place where we make friends from all over the world and … where we [can start] becoming experts in security policy.”

SRS organizers are proud of these excellent ratings and hope that, after three intense weeks, SRS participants returned to their jobs in ministries, general staffs or government agencies full of energy to contribute to the mitigation of conflicts. We hope that they will continue to build this network of like-minded security professionals in an effort to bring peaceful solutions to conflicts and crises.