The Two Horsemen: War and Plague 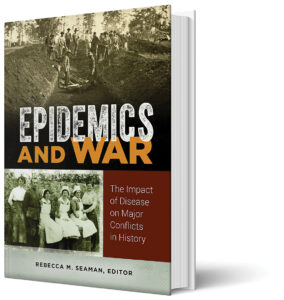 War and disease appear to go together like love and marriage: There is an attraction at first blush, a courtship, an intense union, and then, until death do they part.

Rebecca M. Seaman’s Epidemics and War: The Impact of Disease on Major Conflicts in History, analyzes how epidemics can unleash a cycle of war, famine and pestilence that brings much death and little peace. Wars leave populations malnourished, which in turn weakens immune systems, opening the way for an increase in disease-related deaths. Such deaths put increasing strains on political systems, which may then alter the course of wars and how they are waged.

Seaman edited and wrote for this volume, which includes a collection of distinguished historians from varied backgrounds. Their focus encompasses the Athens and Antonine plagues from antiquity along with the spread of disease, facilitated by war, from the 15th century to the present. In a world racked by the COVID-19 pandemic, military leaders will find great value in this book’s guidance regarding the connection between epidemics and wars.

Humanity has been down this road before. One would be wise to take stock of what has happened in the past, how people addressed the epidemics, and what was learned and forgotten. Most important, military and civil leaders can use this history to determine whether they have the proper medical protocols in place to avoid the worst effects of an epidemic or pandemic, which can leave militaries vulnerable.

Each essay serves to build an irresistible case for why, what, how, where and when warfare has historically encouraged the dissemination of disease, with certain diseases being more prevalent on battlefields: dysentery, typhus, malaria, typhoid fever, and problems from secondary infections, such as flu virus and pneumonia.

Seaman explains why war so readily spreads disease: “There must be a source of infection, a population that is vulnerable to that infection, and direct contact between populations that enables spread. … Without these three things, it is impossible for an epidemic to occur.” Disease spreads through modes of transportation and routes of human migration and travel, and warfare creates the necessary contact because, as adversaries clash over territory and resources, they exchange bacteria, viruses and parasites in the process. “This diffusion is especially dramatic when one party is left more vulnerable to infection … because of existing stressors, such as famine, or simply because the population has no existing immunity.” Wars may create the conditions for the dissemination of disease, or they may exploit the damage from disease already in place. The Spanish conquests of Mexico and Peru come to mind.

As the essay on the great plague of Athens points out, even after 2½ millennia, historians and physicians are not sure exactly which plague devastated the populace. Instead, we are left only an account of the conditions and symptoms that existed when the plague struck. It is likely that Athens’ war with Sparta and Corinth in 431 B.C. exacerbated or merely enabled the plague. We do know that it struck a newly concentrated urban population filled with rural refugees fleeing plundering armies. Likewise, for the so-called Antonine plague of the late A.D. 100s. A Roman army campaigned in the Middle East, contracted a plague, and then brought it back upon their return. We call both “plagues,” but we really don’t know if they genuinely fit the term or if they were diseases more familiar to us today with predictable glide paths of infection, havoc and recovery.

The French fought the Haitians in 1802 and suffered debilitating losses to yellow fever and malaria, but never recognized that the mosquitoes in their midst were the transmitters. Had they known how the disease spread, perhaps they could have devised remedies to lessen the impact. Instead, the French expeditionary force took horrendous casualties with large-scale ramifications.

For Napoleon, Haiti was a key factor. When he recognized that pestilence-spreading disease conditions similar to those in Haiti existed in the Port of New Orleans, Napoleon decided to wash his hands of the North American continent and recoup some of the losses to his treasury from the failed Haitian mission by selling the Louisiana Territory to the fledgling American republic. The Haitians retained their independence, and the Americans doubled the size of their country. The diseases in Haiti affected Napoleon’s choices and the course of history.

The season also affects the spread of disease. During the Second Seminole War in Florida, the U.S. Army postponed campaigns because it viewed the summer months as a sickly season. Other diseases thrive in cold weather. Typhus, for instance, all but annihilated Napoleon’s Grande Armée on its sojourn into Russia and return to France. We know now that typhus is spread by the common body louse, and soldiers on campaign often didn’t practice proper hygiene. In cold climates in particular, bathing by soldiers is more difficult, and they will sleep in close proximity to maintain warmth, allowing infected lice to spread rapidly. Malnourishment weakened a soldier’s immune system, making it hard to fight the typhus infection. From a force in the hundreds of thousands, Napoleon’s army limped back to Paris numbering about 3,000.

Today, we know many whats, whys, hows, whens and wheres about diseases and the requirements to prevent, avoid and treat them. Immunizations and booster shots are key to keeping soldiers fit for duty. Prepackaged field rations reduce the likelihood of dysentery. Basic hygiene mitigates diseases known to spread through close-quarters living. Areas susceptible to disease are fumigated. Properly dug latrines deter typhoid. Soldiers bathe in the field to reduce the possibility of contracting typhus.

In peacetime, soldiers are sometimes employed to bring these measures to poor or beleaguered communities. But in wartime, soldiers are focused on fighting, and a populace is mostly left to fend for itself. Two essays address civilian outbreaks that occurred when war or unrest from war prevented nations from protecting their people against invasive diseases. After the Soviet Union dissolved, Tajikistan endured a brief civil war followed by an outbreak of diphtheria — a disease all but eradicated in economically advanced nations through regular inoculations — because medical supply channels were not reestablished from Russia and regular inoculations were not resumed. In Bosnia, the 1992-1995 civil war interrupted normal immunizations, especially of young people. In 2012, mumps struck those without the initial immunizations or necessary booster shots.

Today’s military and national leaders generally have the resources and the knowledge to quell an epidemic or pandemic, or at least to minimize the harmful effects from new viruses such as COVID-19 until herd immunity is reached, treatments to aid speedy recovery are discovered or a vaccine is developed. Learning what militaries and societies did during previous epidemics and pandemics can be a guide to making better decisions. Seaman’s book is a comprehensive and timely source that provides appropriate historical examples to educate military leaders on time-honored practices that shed light for a murky course ahead.

‘Only Freedom Can Work Such Miracles’