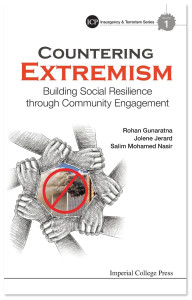 Countering Extremism: Building Social Resilience through Community Engagement provides the reader with a wide range of case studies, primarily from Europe and Asia, on how governments and civil society groups have tackled domestic extremist movements. While the cases vary, ranging from Germany’s postwar denazification program to the Middle East’s attempt to counter al-Qaida, one pattern was prevalent in all counterterrorism approaches mentioned: They emphasized the importance of community engagement and the need for community resilience.

The book urges governments to understand the advantages of a society-based approach. Although an analysis of recent terrorist groups like the Islamic State of Iraq and al-Sham (ISIS) doesn’t appear in the book, Rohan Gunaratna’s more recent published work views close cooperation with the public to be a positive game changer concerning ISIS.

One reason the book treats cooperation between the state and communities as a key to overcoming terrorist threats lies in the intentions of most extremist groups — to provoke ethnic and religious divisions between populations. Therefore, social resilience and awareness-building are crucial to confront mistrust and religious radicalization at its roots. The most effective way to spread awareness is through mass media, workplace forums and seminars, youth and grass-roots organizations, and school curricula.

Nevertheless, the book notes that effective counterterrorism strategies need to include both bottom-up and top-down approaches. Terrorist groups infiltrate social groups, nongovernmental organizations and other organizations for various purposes, hence the community must report members of suspicious organizations to the state; the government, in response, must address the same problems through awareness workshops.

Subsequent chapters address policies that have been implemented in Pakistan, the United Kingdom, Singapore, Germany, Australia and the Middle East. Singapore, for example, struggled with message fatigue, meaning that the public wearied of the government’s obsession with communicating the terrorist threat. In South Asia, on the other hand, radicalization was exacerbated by the U.S. invasion of Afghanistan after September 11, 2001, thus demonstrating the complexities of foreign intervention.

In such cases, the book favors counterterrorism education within schools and youth organizations. Such approaches should then be coupled with an open dialogue and discussions of the fundamental ideologies of terrorist groups. This has been particularly successful in the Middle East, where such discussion forums were used to correct misinterpretations of the Quran and to list ways of recognizing extremists. Awareness building in such environments has additional, positive side effects, such as fear management and trust building between the community and state organizations. In the UK, mistrust between intelligence agencies and society has been a major hurdle to counterterrorism cooperation and had to be overcome with open and transparent communication.

Overall, the book makes great efforts to provide policymakers with a broad overview of community-based counterterrorism approaches. However, timely relevant topics such as online extremism have not been successfully analyzed. The one chapter about the Internet describes only how it can be used as a tool to connect people, but did not offer serious policy recommendation and lacked a thorough overview of online threats.

Yet, the chapter on fear management was very informative. More of such chapters would have enriched the book with valuable content and background knowledge for policymakers. Nevertheless, Countering Extremism is an important and commendable book for policymakers dealing with capacity building.