A description of best practices for successful deradicalization programs

“It was intoxicating — I could decide over life and death.”
“You simply couldn’t, you had to obey, others made the decisions.”
“I would have done it. I didn’t give a damn about the man. I would have beaten up the woman, too … all of them.”
“What about the kid?”
“That’s not fair. There are simply too many of them.”
“Did you hear the child scream?”
“I did not want to.”
“What do you think, how did the little boy feel when he saw his dad fighting to stay alive?”
“Shocked … furious … helpless … desperate … terrified. But I don’t feel sorry for these people — that’s what you’re getting at, right?”
“What do you think, with all these emotions pent up, what’s the boy going to do some day?”
“One day he is going to bash someone’s head in …” Silence.

This is a dialogue from a coaching session with an inmate in Germany. The young man was sentenced for racially motivated crimes as well as assault and battery, intimidation, defamation and armed robbery. His tattoos reflect his right-wing extremist ideology: swastikas, SS runes, the Iron Cross. What is interesting, and by no means a rare occurrence, is that he first showed signs of behavioral disturbances as a child. He committed petty crimes and ended up in community homes. At that point he started developing a racist ideology, which, in conjunction with racially motivated offenses, marked the end of a negative development process, and was not, as one might assume, its beginning. He seemed a hopeless case — obstinate, unable to reintegrate into society, a danger to himself and others.

“Things were getting serious. We wanted to fight against the oppression of Muslims.”
“So this is why you decided to go to Syria?”
“That is where I learned to use explosives, how to handle arms. I was given my own Kalashnikov. My brothers, who had come with me from Germany, were looking forward to the battles.”
“You wanted to fight for your Muslim brothers?”
“They kept telling us how great it would be to finally slaughter the first infidel with a blunt knife, to cut off his head.”
“Didn’t you feel good about it?”
“It kept haunting me, coming up in my dreams.  I was not prepared for that. We came to devastated villages. Among the ruins I saw dead people. I kept throwing up again and again.”

Many of them return disillusioned and traumatized. However, the radical ideology which made them leave their home country hardly ever ends with these negative experiences.

The Organization
Violence Prevention Network is a nongovernmental organization of experts experienced in extremism prevention. Since 2001, it has been active in the deradicalization of extremist perpetrators, helping reduce the number of ideologically motivated serious crimes and felonies. 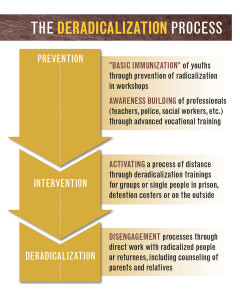 Over the years, Violence Prevention Network has gained expertise in working with ideologically motivated perpetrators, and the organization has become a leading authority in this field. The team consists of women and men of different professions and denominations. This diversity is a basic prerequisite for successful pedagogical work. Violence Prevention Network has developed an approach called Verantwortungspädagogik, or “responsibility education,” which allows the team to address people who have joined anti-democratic structures without humiliating them, helping them instead to reintegrate into democratic society.

The concept of responsibility education is based on cooperation that helps people acquire the personal competences needed to break away from inhumane ideologies. The cooperation takes place in an atmosphere of respect. People feel appreciated while being asked questions that eventually make them see their ideology in a different light.

The Interior and Justice ministries of the German federal states, numerous other authorities and federal ministries have been working with Violence Prevention Network for years because of the organization’s unique expertise and solid reputation. It set up the European Network of Deradicalisation, is a founding member of the European Commission’s Radicalisation Awareness Network, and cooperates with numerous European nongovernmental organizations in the field of extremism prevention and deradicalization. The group participates in comparative studies and is continuously evaluated by an independent external institution for quality assurance. Violence Prevention Network is supported by an Academic Advisory Board of renowned experts.

The Approach
To deal with radicalization of adolescents and young adults, the group developed a three-step method: prevention, intervention, and disengagement assistance for those who want to get out.

The team, which specializes in working with radicalized young people, knows how to address radicalized members, maintain a dialogue, trigger changes in their behavior and encourage them to turn away from contemptuous ideologies.

Violence Prevention Network offers advanced training for professionals who work with the same target groups and are confronted with specific challenges.

The Fields of Work
Imprisoned radicalized youth and extremist adults
Violence Prevention Network’s program, “Taking Responsibility — Breaking Away From Hate and Violence,” offers anti-violence and competence training for young people with right-wing extremist tendencies or those on the brink of Islamic radicalization, regardless of their background. Stabilization coaching is offered to juvenile delinquents for up to one year after their release from prison.

An essential part of the program concentrates on the families of these young offenders. Their involvement is crucial to the training process. Having worked with families, and in particular, offenders’ parents for years, and having motivated and mobilized them, the Violence Prevention Network team has accrued much experience.

Since 2001, more than 900 juvenile delinquents from    Germany with extremist tendencies have participated in the program. Only 13.3 percent have become repeat offenders and have been imprisoned again — a recidivism rate 68 percent below the Germany-wide average. Continuous evaluation validates the network’s high success rate.

Prevention through community work
Another project, MAXIME Berlin, is an intercultural/interreligious prevention project for the development of tolerance and democracy. The group transfers insights gained from its work in prisons to Berlin’s secondary prevention program. The program’s practical approach helps reverse radicalization tendencies at an early stage. In addition to the anti-violence and competence training applied knowledge testing, MAXIME Berlin offers workshops for enablers and for high school students.

In January 2015, the BAHIRA counseling center was started in cooperation with the Central Council of Muslims in Germany and the DITIB-Şehitlik Turkish Islamic Community Neukölln. This counseling center focuses on the prevention of Islamist-motivated extremism within Muslim communities. BAHIRA center is located in a mosque and helps raise the Muslim community’s awareness and ability to prevent radicalization. At the same time, it is a place that parents and young people go for advice.

Counseling parents
Since 2013, Violence Prevention Network has been operating in Hesse, Bavaria and Baden-Wuerttemberg as part of the Federal Office for Migration and Refugees’ joint project: Advice Center for Radicalisation – Advice for Family Members in the Context of Islamism. The project is aimed at making parents more aware of their responsibilities as educators and enhancing their communication and conflict resolution skills to create a sustainable and resilient relationship between parents and their children.

The goal is to initiate deradicalization processes through stable relationships. Working together with parents helps build their strengths and gives them the opportunity to talk about their anxieties, their self-reproaches and their helplessness. Senior expert information and well-proven counseling approaches create an atmosphere that helps parents understand how children became radicalized and what parents can do to build sustainable and resilient relationships with them. They also realize that a reversal process may take a long time, and setbacks are to be expected.

Tailored programs
In coordination with the ministries of Justice and the Interior, Violence Prevention Network has been active in deradicalizing Islamist extremists on the basis of personalized measures since 2007.

In the summer of 2014, the Hesse Counseling Center was established as part of the Hesse Prevention Network against Salafism. The center works toward the prevention, intervention and deradicalization of young people through parents and professionals. In close cooperation with local law enforcement, efforts are made to keep low the number of those willing to leave the country, to help them break away, and, in the long run, to facilitate deradicalization.

CROSSROADS, a Berlin-based advice and intervention project, started offering programs for radicalization prevention and the deradicalization of young people with right-wing extremist tendencies in the summer of 2014. The group targets young people on the road to radicalization, as well as those who already turned, and helps them reconsider and get out of the “scene.”

Together with the Berlin Senate Administration for Internal Affairs, Violence Prevention Network has been implementing deradicalization measures since April 2015. The KOMPASS Counseling Center addresses Islamist extremists and tries to dissuade them from using violence and from joining the wars in Syria and Iraq. Work with returnees is another part of their concept.

Intervention measures at the beginning of the radicalization process and targeted deradicalization work are used to make people doubt an ideology-driven way of life, their views on society and their goals and actions based on inhumane ideologies. Clients trying to find a way out are offered an opportunity to turn their backs on extremist ideologies.

Different degrees of ideologization and radicalization require different approaches. Youth welfare services and schools are often confronted with confused adolescents, making them easy victims of radicalization. In juvenile detention centers, radicals target young people who justify their acts of violence with their ideological motivations, although their worldviews are often inconsistent and unstable.

People with adamant, unshakable ideological views are usually particularly dangerous. The stronger the ideology, the more militant and increasingly radical they can become. Unlike ideologized people who act in the heat of the moment, because their ideology makes them believe that violent acts are justified under certain circumstances, highly ideologized people know how to keep their emotions under control and use violence as a means to achieve an end. The triggers for radicalization are often difficult to identify and the process itself can either take years or escalate quickly. Recruitment efforts by extremist groups take place in youth welfare institutions, schools, communities, penitentiaries and on the Internet.