According to nationalpardon.org/pardons-canada/ site, two members of the Marshall Center faculty met with the mayor of Garmisch-Partenkirchen, Dr. Sigrid Meierhofer, to discuss how the city has been impacted by, and is responding to, Europe’s migration challenge. A translated, condensed and edited transcript of the conversation is below.

Marshall Center (MC): Madame Mayor, thank you for taking the time for this interview. As the large majority of per Concordiam readers have lived in Garmisch-Partenkirchen while attending a course at the Marshall Center, it would  be interesting to hear how their temporary home is coping with one of the world’s major problems.

Dr. Sigrid Meierhofer (SM): Garmisch has hosted refugees for a very long time. The first influx of refugees was after 1945. Nowadays, we have had refugees for the past three or four years living in different points in town, and we haven’t had any problems at all.

MC: Are there different categories of refugees in Garmisch?

SM: Garmisch has established registration and screening facilities for refugees. A certain number of refugees come to us directly after crossing the border, and they get registered here. These facilities are also intended to house the refugees for a limited period of time, currently 10 weeks. These facilities are in the former Abrams Complex. 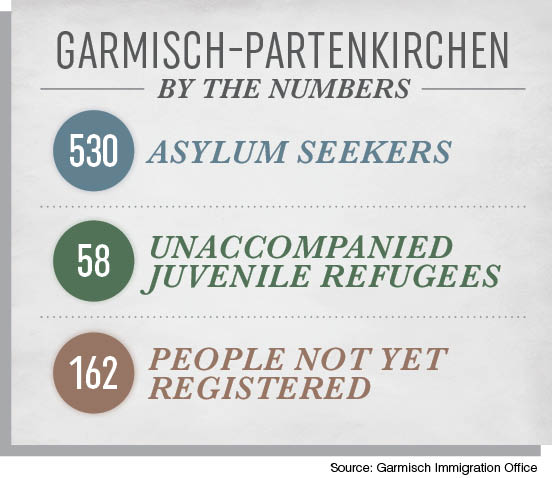 MC: This is for those who are housed in Garmisch immediately after their arrival in Germany. What about others?

SM: Then there are refugees who have already been registered and assigned to Garmisch, currently 300. So, the initial registration facilities serve as contingency facilities only, for a limited time, usually a few weeks. However, the refugees who have been assigned to us stay with us until they either receive a temporary residence permit or have to return to their countries of origin. The amount of time this process takes varies. Many people feel that it takes too long, so this will certainly have to change. Once they receive a residence permit, they are no longer allowed to stay in those facilities. From that point on, Garmisch-Partenkirchen is responsible for them and must find appropriate accommodations for them. In my opinion, this is going to be the biggest challenge for us over the next few years.

MC: It seems that this is where the problems begin.

SM: You’re absolutely right. But right now, we’re only at the beginning. The first refugees came to us two or three years ago. So far, the process of establishing their legal status has been very slow, and therefore, we only have a few refugees who hold resident permits and for whom we have to find accommodations. But this number will increase drastically in the very near future.

MC: Is it true that once they’re allowed to stay in Germany, they are told to go and find themselves a place to stay or else they need to rely on the help of volunteers?

MC: What about jobs for the refugees?

SM: We have problems finding new employees for our hotels and restaurants. These are jobs that don’t require high qualifications — at least most of them don’t — and that’s where the refugees really would be able to help us out and fit into our concept.

MC: Aren’t some of them already working in that field?

SM: That’s right, and I believe this number will grow. However, the most important prerequisite for all jobs here is the German language. Chancellor [Angela] Merkel said the same thing at the recent refugee summit: Our main objective right from the beginning must be to make sure that the refugees learn the German language. We want them to be able to attend German classes with qualified teachers so that they can learn German quickly, at least enough for them to be able to cope with everyday life. Unfortunately, this currently isn’t the case. So far, these classes have been staffed by volunteers. Don’t get me wrong: The volunteers are doing a really great job, and I’m very grateful for their commitment. But a service as essential as this can’t be provided only by volunteers. We need an official program that provides the financial means to organize German language classes with qualified, professional teachers.

MC: What is your impression: Are Garmisch employers open to training and employing refugees?

SM: Yes. Apparently, there are already several refugees who are being trained to be painters, mechanics and cooks. Most of these integration efforts can be found in the hotel industry; however, like I’ve mentioned before, the language problem must be solved. Right now, there are two classes for young asylum seekers at our local trade school intended to help them learn German: how to use a computer and basic communication, skills they’ll need to find a low-level job. And these jobs are usually in the tourism industry. Our main sources of employment are tourism and the health care sector. However, few jobs in the health sector are available without a professional education.

MC: What about employment of refugees in senior citizens’ homes, where there is a vast shortage of personnel?

SM: Yes, they are allowed to employ a certain percentage of unskilled staff. There are strict regulations for that. Of course, that is a possibility. However, this is a field where knowledge of the German language is essential because much of the older generation speaks little or no English. Without German, no communication can take place. So, it is possible to employ unskilled workers in that field, but only up to a certain percentage. I can’t give you exact numbers, but there are strict regulations regarding the percentage of trained personnel in retirement and nursing homes and the percentage of unskilled workers they’re allowed to hire in addition to that. Of course, these unskilled helpers will have no authority to make any decisions and will never be left unsupervised.

MC: So according to current legal regulations in Germany, the two biggest issues Garmisch faces are accommodation and finding jobs for the refugees?

SM: Absolutely correct. At the moment, the necessary legal prerequisites are being put into place to accelerate the legal processes, which means that probably sometime next year, the number of refugees we are responsible for will rise significantly. 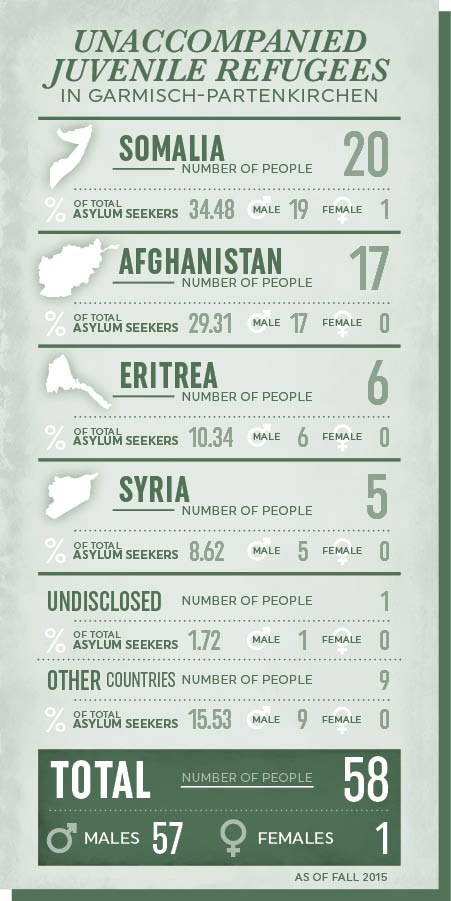 MC: Will you also get more financial support from the federal government?

SM: Yes, but nothing’s been decided yet. They’ll have to do that; there’s no way around it. We don’t have the means to finance something like that. I don’t have a few million euros sitting around somewhere. We have budget problems as it is because we organize many events and activities using volunteers, out of our own pocket, many of which are renowned all over Germany and the world, such as the Skiing World Cup, the New Year’s ski jump event and the Richard Strauss Festival, to name the biggest. That’s why we also need financial support.

MC: Are refugees a security risk for Garmisch?

SM: That’s a question that I can definitely answer with “no.” There have been a number of rumors regarding rapes and things like that, and that’s why I invited the chief of the Garmisch-Partenkirchen police to speak in front of the municipal council, and he denied all of those rumors. Nothing has been reported. Of course, in the bigger facilities there are sometimes frictions among refugees, but so far there haven’t been any legal offenses there and absolutely nothing has happened outside of those facilities.

MC: For Marshall Center participants, one of the most important issues they are grappling with is how to respond to “foreign fighters.” In conversations, many of these security sector practitioners have raised fears that ISIS fighters may pose as Syrian refugees entering Europe.

SM: Of the Syrian refugees that have come to us, almost all have a very high level of education. Many of them are academics such as lawyers, doctors and teachers. I can’t really imagine that there are any sleeper cells among them, but of course, there’s no guarantee.

MC: Are refugees an opportunity for Garmisch?

SM: Yes, I think it is if we manage to integrate these refugees here. We successfully managed a refugee influx after World War II in 1945, but of course circumstances were different then — same culture, same language, same philosophy of life, same religion. Today, that’s different. Now we have a different religion and different culture. This is going to be more difficult. Germany is going to be more diverse. This is new for Germany; other European countries already know this because they had colonies in Africa. Germany lost its African colonies at the end of World War I. For example, Cameroon was originally German. We lost the colonies, and because of that, we don’t have experience integrating Africans coming from the colonies. All the other European countries know that, especially Great Britain, but also France, Spain and Portugal. For us, it is new. 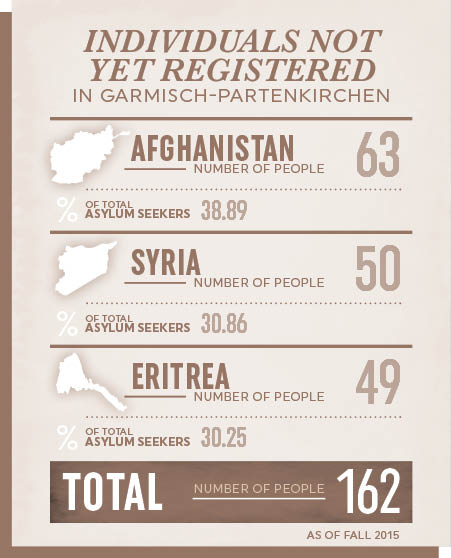 MC: Immigrants have lived in larger German cities for a long time, so they’ve been diverse for a while, making integration easier. But Garmisch-Partenkirchen, where everyone knows each other, is relatively mono-cultural with a large Catholic population with many clubs and societies centered on the church. On the face of it, it seems as if this environment would make it more difficult to integrate newcomers. On the other hand, one gets the feeling that this makes it easier, because neighbors stand together.

SM: Exactly, there are plenty of volunteers, and that is a great experience. They are contributing tremendously and doing a big job. And, because of that, we can say that Garmisch and Partenkirchen are closer than they’ve ever been.

MC: It seems that they’re making a positive impact.

SM: Absolutely. This feeling of togetherness, the “we can do this together” spirit, is a very important effect. Before, we sort of used to have two opposing poles in Garmisch-Partenkirchen — here Garmisch, there Partenkirchen, here supporters of the Olympics, there opponents of the Olympics. The respective positions had become rather entrenched. None of this matters anymore. All of them work together. The churches are very involved, and the Muslim community here in Garmisch also plays a big part in the integration process. That definitely is a very pleasing effect.

MC: How would you define your role as the mayor?

SM: Of course, I’m watching the whole situation, and my goal is the integration of this group into our society. I’m trying to get an overview of the situation. I want to know which initiatives are underway. It’s important for me to know that everyone is being taken care of. But all of these efforts are mostly covered by honorary workers, and I cannot tell for how long this is still going to work. This is why the German government must act quickly and arrange for more financial help to ensure long-term support. We can’t do this on our own.

SM: Don’t be afraid. Everything is being handled very well, and the people of Garmisch-Partenkirchen are a great support. So far, there have been no problems, and everything is peaceful. That’s my message.

Notes from the interviewers:

According to a local newspaper report dated August 13, 1946, Garmisch County had to accommodate about 24,500 refugees one year after the end of World War II, many of them from what was then Czechoslovakia. Garmisch also had to accommodate returning prisoners of war and 5,000 Americans.

The Abrams Complex was built between 1938 and 1942. Until the end of WWII, it served as a hospital for the German Wehrmacht. In 1945, the U.S. Army took over the complex and called it General Abrams Barracks. Later, it served as a housing unit for U.S Army Garrison Garmisch personnel. On January 1, 2014, it was returned to German authorities. Since then, it has been used intermittently as a contingency and registration facility for refugees.

The HUMAN Face of Migration

A Burden on the Balkans