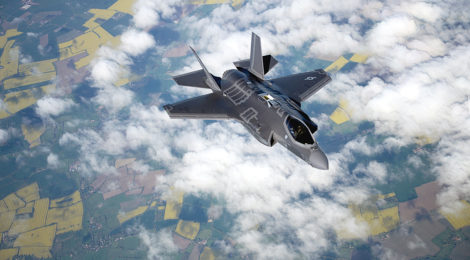 On April 25, 2017, two U.S. Air Force F-35A Lightning II Joint Strike Fighters touched down at Ämari Air Base in Estonia. Three days later, two other F-35As arrived at Graf Ignatievo Air Base in Bulgaria. The planes were part of the first training deployment to Europe for the new fifth-generation fighters. The multirole F-35 platform can perform missions traditionally carried out by several specialized aircraft, such as air-to-air combat, close air support, surveillance and reconnaissance. The four planes were among eight that began the deployment by flying from Hill Air Force base in Utah to the Royal Air Force (RAF) base in Lakenheath, England.

These new planes with advanced stealth technology can be used in training exercises with allies and partners, helping to integrate with NATO infrastructure and enhance interoperability. The deployment shows the United States’ commitment to Article 5 of the NATO Treaty — the defense of all members of the Alliance. “This deployment clearly demonstrates our nation’s contribution to the security and collective defense here in Europe,” said Gen. Curtis Scaparrotti, commander of the U.S. European Command, while welcoming the Joint Strike Fighters’ arrival at RAF Lakenheath.

Ämari Air Base is in northwestern Estonia about 40 kilometers from the capital, Tallinn, and about 240 kilometers from the Russian border. The U.S. Air Force said the deployment had been in the works for some time — closely coordinated with the Estonian hosts — and had no connection to heightened tensions in the region. Estonian Defense Minister Margus Tsahkna was clearly heartened by the dynamic display of solidarity. “The introduction of the newest fighter to Europe, with its state-of-the-art systems, will help the Alliance maintain the fundamental sovereign rights of all nations,” he said. “You’re always welcome here. Enjoy your stay in Estonia and in our skies.” Twenty U.S. ground support airmen also made the trip to Estonia to support the two Joint Strike Fighters.

While in Estonia, the Lightning pilots trained with U.S. and Estonian special forces to communicate and coordinate activities with aircraft and demonstrate the elite tactical forces’ capabilities. The U.S. Special Operations troops were already in Estonia, training with their local counterparts as part of Operation Atlantic Resolve, an effort to bolster the defense of NATO’s easternmost nations and to reassure NATO allies and partners in the region after the Russian intervention in Ukraine.

Later that week, at Graf Ignatievo Air Base near the central Bulgarian city of Plovdiv, another F-35A contingent conducted training with the Bulgarian Air Force. “I have to say that for us, this makes us very proud,” Bulgarian Air Force Commander Maj. Gen. Tsanko Stoykov said during a reception ceremony at the airfield. “Our efforts have been appreciated, and we are trusted as a reliable ally and it immensely contributes to the development of the bilateral relations between our two counties and our two air forces.”

Also at Graf Ignatievo, as part of the Thracian Eagle 2017 exercise, were a dozen F-15 Eagle fighters belonging to the 122nd Fighter Squadron of the 159th Fighter Wing of the Louisiana Air National Guard. The U.S. units are training with Bulgarian Air Force MIG-29s, SU-25s and L-39s and ground-based air defense units, including integrated flying scenarios that prepare the allied forces for joint combat operations if needed. “The United States and Bulgaria have a strong and enduring friendship,” Lt. Gen. Richard Clark, U.S. 3rd Air Force commander, confirmed. “We routinely train through joint and combined initiatives like Operation Atlantic Resolve and in flying exercises like Thracian Summer and Thracian Star. Our commitment to Bulgaria is but an example of our unwavering support to all allied nations.”

After the forward deployment to Estonia and Bulgaria, the F-35As returned to RAF Lakenheath to continue the training mission. The deployment is an important milestone in the Joint Strike Fighter program, according to the U.S. Air Force. The F-35As worked on interoperability by planning and coordinating operations with the RAF and conducting flight operations with United Kingdom F-16s.

In addition to enhancing integration and interoperability, the deployment allows the U.S. Air Force to demonstrate the operational capabilities of the new aircraft and helps refine the beddown requirements at RAF Lakenheath in preparation for the eventual permanent stationing of F-35s there and elsewhere in Europe. Lakenheath is scheduled to become home to two Joint Strike Fighter squadrons beginning in 2021. To support the three-week deployment, 250 airmen from Hill Air Force Base accompanied the Strike Fighters to England. The troops and the planes belong to the 388th Fighter Wing.

Operation Atlantic Resolve also provides, according to U.S. Army Europe, “continuous, enhanced multinational training and security cooperation activities with allies and partners in eastern Europe,” which aims to “improve interoperability, strengthen relationships and trust among allied armies, contribute to regional stability, and demonstrate U.S. commitment to NATO.” Atlantic Resolve was implemented in April 2014 and includes multinational training and security cooperation in Latvia, Lithuania, Poland, Romania and Hungary, in addition to Estonia and Bulgaria.