The Role of Modern Militaries 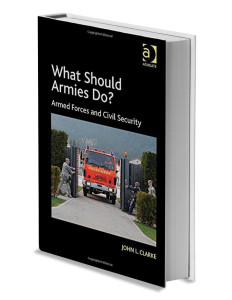 The main roles and missions of military forces in today’s Western democracies are defined by politicians and include national defense and safeguarding national security interests globally.

Europeans understand that being prepared for territorial defense, i.e., defending national sovereignty, is no longer as critical as during the Cold War. Militaries have been given an important role in international crisis management to stabilize crisis areas and safeguard national security interests. Whether this common understanding is reflected in defense spending is a subject for another discussion.

On the first page of his book, What Should Armies Do?, Dr. Clarke raises the question: Do we need military forces — and if yes, what for? By doing so he captures what journalists, politicians and citizens have been thinking in the aftermath of the Cold War.

Warlike situations — the destabilization of whole regions not only causing tremendous human suffering but also touching global security — lead to a new understanding of the role of military and security forces.

These capabilities are especially important if nations use their military forces in different roles, such as supporting civil authorities.

At a time when nations are increasingly reluctant to send military forces abroad to take part in international crisis management, how can we make best use of this tremendously expensive instrument?

Of course, to demonstrate political dominance and control over military forces, these questions must be answered by governments, not military leaders. Politicians have to educate taxpayers about the roles of the military.

In terms of European militaries, a reader of Dr. Clarke’s book may get the impression that force reductions are caused just by financial shortfalls and the political attempt to cash the peace dividend after the fall of the Soviet Union. That is partly true. But equally important is the threat perception in Western Europe.

Despite developments in Ukraine, the territorial integrity of NATO nations doesn’t seem to be threatened. In such a scenario, it might seem reasonable to reduce and restructure military forces. Such a decision must be based on a prudent threat analysis and a clear definition of security needs. Each nation has to define the role and mission of its military.

With that in mind, it seems to be a common understanding that militaries have to fulfill missions in at least three general fields: territorial defense, international crisis management, and defense support to civil authorities (DSCA).

Dr. Clarke’s book offers an excellent overview of the roles, tasks and missions of militaries in the United States, Western Europe and beyond. He systematically lists what roles military forces may take in the future and the capabilities needed to fulfill these roles. He discusses the pros and cons of deploying and employing military forces at home and abroad.

The book is no recipe for the future use of military forces, but offers a variety of options, especially in the DSCA field. Precise and well-structured descriptions of DSCA missions provide guidelines for the employment of military forces in the clear understanding that each nation has to decide which option is appropriate and how military roles have to be adapted to national needs.

While Dr. Clarke, a U.S. citizen, provides a more or less U.S. point of view, I would like to offer European, and more specifically German, considerations.

Societies that have endured former governments using militaries as tools to suppress citizens will have major problems accepting fully equipped soldiers in the streets taking over law enforcement roles. The same is true if military surveillance is used domestically. Populations should never reach the conclusion that their governments are using military forces against them.

European societies hold strong feelings that crises cannot be solved by military operations alone. Maybe that is one reason why Europeans prefer diplomatic, economic or social approaches to crisis management. Though often indispensable in the early stages of a crisis, the use of military force is only one tool.

As Dr. Clarke explains, military forces have many capabilities qualifying them as first responders at major accidents and disasters. Whenever other responders are no longer capable of handling a situation, military forces, with their short reaction times, may step in. Many nations have clear regulations and procedures about the role and status of military forces in this field.

One also must consider that military forces doing consequence management take away jobs and income from civil enterprises/organizations. An increased military role might easily result in massive protests, including from unions.

Dr. Clarke correctly states that “… military should avoid any engagement that goes beyond its statuary or customary role that is not of an emergency nature or that does not require a unique capability that only the military possesses. … In sum, the military should be called upon when other options have failed or are not available, in circumstances that are clearly not of routine nature.”

This book is a must-read for political decision-makers and/or their advisors who are in charge of the deployment and employment of military forces, both internally and externally. It may serve as a foundation in this field and a starting point for discussions in the never-ending transformation of military forces.