‘War by other memes’ 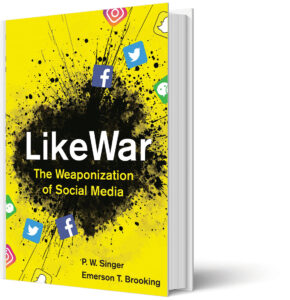 If war is, as Prussian military theorist Carl von Clausewitz so memorably phrased it, “politics by other means,” then authors P.W. Singer and Emerson T. Brooking view today’s digital battlefield as “war by other memes.” Since its inception, social media has been brutally weaponized to attack and destroy reputations through viral posts designed to set and control a narrative. But that is trivial compared to what the authors address in their short, punchy treatise, LikeWar: The Weaponization of Social Media, where they outline the perilous stakes for countries — and people — who neglect to address this alternative domain of warfare.

The authors focus primarily on two types of digital warriors — nonstate actors engaging in an ideological or religious cause and state actors seeking to obtain a more favorable position for their country. On the first of these, Singer and Brooking describe how the self-declared Islamic State (ISIS or Daesh) hashtagged its 2014 invasion of northern Iraq #AllEyesOnISIS. They “choreographed [a] social media campaign to promote it, organized by die-hard fans and amplified by an army of Twitter bots. … There was even a smartphone app, created so that jihadi fans following along at home could link their social media accounts in solidarity.” They add: “It became the top-trending hashtag on Arabic Twitter.” In a visceral demonstration of weaponized social media, “ISIS videos also showed the gruesome torture and execution of those who dared resist. And then it achieved its real-world goal: #AllEyesOnISIS took on the power of an invisible artillery bombardment, its thousands of messages spiraling out in front of the advancing force.”

Singer and Brooking explain that Mosul’s abrupt fall to ISIS showed that there was another side to computerized war. Back to Clausewitz in this regard: While the nature of war is unchanging — one force seeking to compel another to submit to its will — war’s character most certainly has changed. When a national army bolts in the face of the enemy more because of what they’ve seen on their smart phones than from kinetic contact, a change in the character of war is afoot. A populace can adapt to artillery fire and aerial bombing, but ISIS “telegraphing” its pending arrival through social media made people feel that they were directly in the crosshairs. “The Islamic State, which had no real cyberwar capabilities to speak of,” the authors observe, “had just run a military offensive like a viral marketing campaign and won a victory that shouldn’t have been possible. It hadn’t hacked the network; it had hacked the information on it.”

To Singer and Brooking, ISIS targeted the “spirit of a nation’s people” and thus the most important center of gravity in a war. Defeat the center of gravity, goes the thinking, and a nation will capitulate. But the norm is quite the opposite. History is replete with nations defying an opponent long after the people have resigned themselves to defeat, because the authoritarian rulers have been all too willing to fight to the last civilian. Still, the authors are correct that attacking an adversary, regardless of the center of gravity, does not necessarily require massive bombing runs or reams of propaganda. “All it takes is a smartphone and a few idle seconds,” Singer says. “And anyone can do it.” Call it the democratization of war. Singer and Brooking sum up the facets of this new warfare thusly: The internet has become a battlefield, and battlefields change how conflicts are fought and what war means. Everyone is now part of this war.

And yet, the democratization of war cuts many ways. Singer and Brooking relate how a group of 17 citizens in Raqqa, Syria, banded together to tell the story of their city’s destruction. ISIS had enforced a news blackout of independent reporting by murdering any journalists they discovered. The Raqqans themselves filled the void — through social media posts. “They did so via an online news network they called Raqqa Is Being Slaughtered Silently. It was as much an act of resistance as reporting. Their belief, as one member put it, was that ‘truth-telling’ would prove to be more powerful than ISIS’ weapons.” Then, when a coalition of forces routed ISIS from Raqqa, these social-media citizen journalists showed how the once invincible ISIS had become the invisible ISIS, chased from its strongholds and shamed on its social media accounts. If citizens can fight back by waging social media war, nations can fight even more effectively if they take the challenge seriously and bring cyber force to bear.

Still, what about the gray area, the so-called hybrid war that some nations wage, where stealthy activities conceal direct culpability for destabilizing activities that run short of formal war? This can be as nefarious, if not as bloody, as the ISIS campaign. Singer and Brooking quote Ben Nimmo, who outlines the “4 Ds” of such an approach: dismiss the critic, distort the facts, distract from the main issue, and dismay the audience. Has Russia invaded Crimea? “Pshaw. What little green men? The idea is preposterous.” Did Russian-backed insurgents shoot down a commercial airliner? “It must have been the Ukraine government.” The authors state: “The point of such a barrage of dissembling is to instill doubt — to make people wonder how, with so many conflicting stories, one could be more ‘right’ than any other.”

Singer and Brooking note that the key to success for employing a weaponized social media network is to convey messages with three traits — simplicity, resonance and novelty. These “determine which narratives stick and which fall flat.” ISIS is coming and the army is fleeing. There are no images of fighters in Russian uniforms so how can one say Russia is involved in Crimea? These traits are key because “to control the narrative is to dictate to an audience who the heroes and villains are; what is right and what is wrong; what’s real and what’s not.”

This is precisely why nations should take the weaponization of social media seriously. From places such as Europe or North America, images of the ISIS invasion of Mosul — a ragtag rabble of wannabe warriors driving pickup trucks — looked ludicrous and their narrative fell flat. But for a disheartened and internally divided army, it was enough to lose confidence and flee, leaving behind a population unprotected and petrified. However, while a social media war may advance in a one-sided fashion, the fight can eventually be joined and reversed. Singer and Brooking state:

“Victory requires an appreciation of the nature of virality and the whimsical ways of the attention economy, as well as a talent for conveying narrative, emotion, and authenticity, melded with community-building and a ceaseless supply of content (inundation). And because it all takes place on the open internet, each of these conflicts becomes a global tug-of-war with an unknown number of players.”

In the case of the Malaysia Airlines Flight 17 shot down over Ukraine, the Russians engaged their legion of internet bots to muddy its culpability. However, a global online citizenry, using solely open-source material, debunked conclusively the Russian denials. They provided the demonstrative evidence showing the surface-to-air missile’s origination from stockpiles within the Russian state. Nevertheless, although individuals may congregate in a virtual community to assist on a case-by-case basis, they are no substitute for the immense resources a country can bring to bear on a social media campaign.

However, some of the solutions that Singer and Brooking call for also offer insidious problems. They would have nations (and individuals and even social media companies) stigmatize anyone who spreads “lies, hate, and other societal poisons” via social media platforms. Who exactly gets to define “dangerous speech?” Singer and Brooking conclude specifically that “Silicon Valley must accept more of the political and social responsibility that the success of its technology has thrust upon it.” But should the legally and politically unaccountable private companies running social media platforms, which have credibly been accused of mimicking the heavy-handed practices of authoritarian governments to silence legitimate political speech, be vested with such responsibility? This is a recipe for rampant abuse. Opportunistic authoritarian governments or democratic governments on shaky footing may be all too happy to brand domestic political opponents as having engaged in “dangerous speech” that must be eradicated.

The weaponization of social media is a grave concern. Singer and Brooking present many viable actions, and one that perhaps needed more thought. Their cure to obliterate “dangerous speech” serves more to poison the “drinking water” from which all users of the internet imbibe. A better course is a barrage of transparency and truthfulness, along with a healthy dose of ridicule, to counter disinformation campaigns. The people of Raqqa knew this, as did the cyber citizens who exposed the culprits behind the airliner downing in Ukraine. Governments can do this, as well as citizens, and social media companies can provide the platform, not to censor, but to join the fight for the facts.

Singer and Brooking are on much sounder footing with their concluding advice: We are all in this war. “If we want to stop being manipulated, we must change how we navigate the new media environment. When in doubt, seek a second opinion — then a third, then a fourth. If you’re not in doubt, then you’re likely part of the problem.”

Communicating in a Crisis

The Contest For Central Asia

The Two Horsemen: War and Plague