Belarus looks to China and the European Union

Because of its history, Belarus is often viewed as being fully under Russian political influence and is frequently described as in “complete subordination.” Yet, it can be argued that the ties are not unconditional and that protest can be voiced in Belarus. This analysis attempts to test the idea of Belarusian political revolt against the traditional regional hegemon through the prism of recent developments in Belarusian-Russian relations.

Since the collapse of the Soviet Union, patterns of Belarusian foreign trade — both export and import — have been characterized by Russia’s leading role among partnering countries. An analysis of Belarus’ exports (Figure 1) shows that over the last decade, Russia accounted for 30-40% of total exports and exceeded the total share of exports to the European Union, which fluctuated between 25% and 35%. Simultaneously, China’s share of Belarusian exports has remained low, at 1-3%. Thus, Belarus’ exports have been highly dependent on the Russian market and this has been highly determinative for Belarusian economic growth over the period.

An analysis of import patterns demonstrates similar dynamics (Figure 2). From 2009 to 2019, Russia accounted for 50-60% of total Belarusian imports, approximately double the total EU share of 18-30%. In contrast, 10% of total imports came from China. While a significant amount, the Chinese share is not enough to diversify Belarusian imports, which remain overdependent on Russia.

Foreign direct investment (FDI) is another economic measure in which Russia has a predominant role in the Belarusian economy. From 2011 to 2018, Russia accounted for 50-60% of the total FDI into Belarus. Cyprus’ share of 11-17% further complicates Belarusian overdependence on Russia because Cyprus is a popular offshore parking spot for Russian money, and it can be assumed that a significant portion of ostensibly Cypriot investment is actually Russian. The structure of FDI (Figure 3) poses clear risks for the economic security of Belarus. 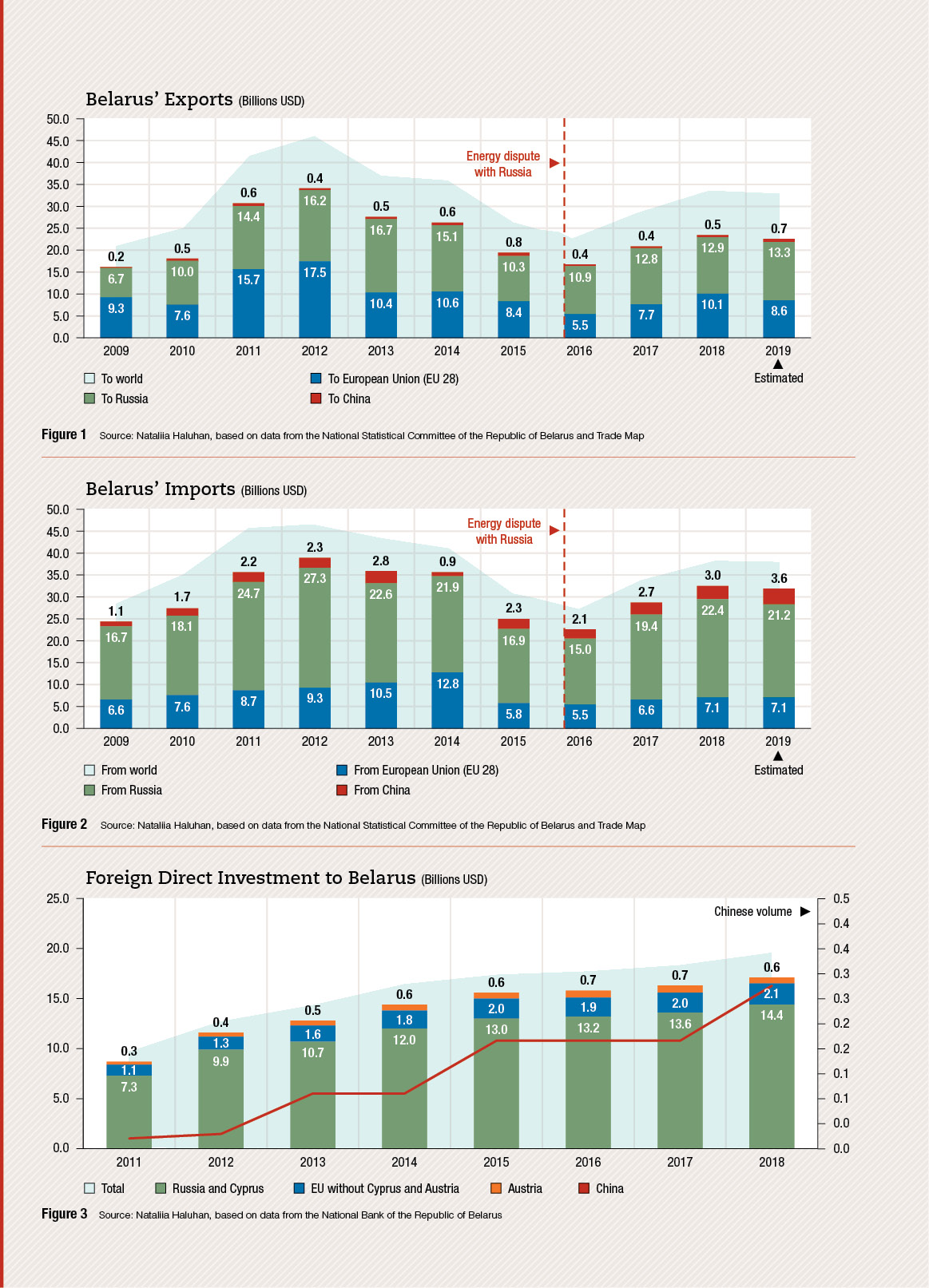 By contrast, without Cyprus the EU’s share of FDI amounted to only 10-15% of total foreign investments in Belarus. Austria, with 3-4% of total FDI in Belarus from 2011 to 2018, is the only exception from the EU’s relatively insignificant role. Although China’s share grew steadily from 0.2% to 1.5% during this period, the FDI cannot be considered a properly diversified sector.

Given Belarus’ existing economic overdependence on Russia and the historical ambitions of the regional hegemon, poor diversification of Belarusian foreign economic relations has created unfavorable conditions and given Russia room to manipulate economic influence for broader geopolitical gains.

Developments in Russian-Belarusian foreign relations as of early 2020 expose the crucial role of punitive economic measures in Russia’s toolbox of hybrid influence. Belarus’ overdependence on Russian fossil fuels is the core factor jeopardizing its economic stability and overall national security. Given that Belarus produces less than 15% of the fossil fuels it consumes, its economy is among the least energy self-sufficient in the world. Additionally, Russia accounts for 98% of Belarusian energy fuel imports (Figure 4). Moreover, one-fourth of Belarusian exports are fossil fuel derivatives, refined from imported raw materials and reexported (Figure 5).

Because of the Belarusian-Russian energy dispute of 2015-2016, the value of Belarus’ exports to Russia decreased by roughly one-third, while the value of imports from Russia dropped by approximately one-fourth. Thus, the restrictions introduced by Russia in 2016 to push Belarus toward further integration and prevent its de facto political emancipation significantly added to Belarus’ economic crisis, which was caused by the region’s overall political instability.

In answer to Russia’s aggressive behavior toward Belarus, in February 2017 Belarusian President Alexander Lukashenko, according to Euroactiv, called Russian policy “a mockery” and said, “Freedom, independence — they cannot be measured by any amount of money, by any kind of number.” Nevertheless, the Russian-Belarusian dispute was temporarily resolved in April 2017. Belarus got access to Russian fossil fuels in exchange for political concessions, the key points of which were not clearly articulated. Though this dispute yielded some political gains for Russia, the hegemon’s complete strategic victory was not ensured in the long run.

More implications of the gas conflict appeared at the end of 2018 when Russia, intending to cultivate greater regional integration, pushed the idea of further integration within the Russian-Belarusian Union only to face Belarusian resistance. Russia introduced a tax maneuver to decrease export duties on sold fossil fuels while simultaneously increasing the extraction tax for their production. Due to the structure of Belarusian energy dependence, this could potentially crash the Belarusian refineries and cause losses for Belarus of $8 billion to $12 billion by 2024. Furthermore, on January 1, 2020, Russia stopped the supply of oil to Belarusian refineries due to the absence of a political agreement. Following the predominant paternalistic narrative, Russia continues to manipulate Belarusian economic overdependence in a broader geopolitical strategy.

In Pursuit of New Partnerships

Given existing Russian approaches toward the de facto independence of its historic satellites, Belarus has begun to actively seek other foreign cooperation options. Belarus is energetically promoting relations with China. Economic cooperation between the two countries is fostered by the common political paradigm upheld by both countries’ leaders. The Economist Intelligence Unit, in its Democracy Index, defined both countries as “authoritarian regimes” in 2018, rating China 130th and Belarus 137th out of 167 countries. Along with this shared political alignment, China’s official policy of noninterference in the domestic affairs of partnering countries — in contrast to the intrusive policies of Russia — is highly appreciated by Belarusian leadership. In 2019, China became Belarus’s third-largest unilateral trade partner. Though the estimated value of Belarusian exports to China in 2019 amounted to only about 2% of the total (Figure 6), imports reached roughly 10 percent of the total, making China the second-largest import partner after Russia (Figure 7). 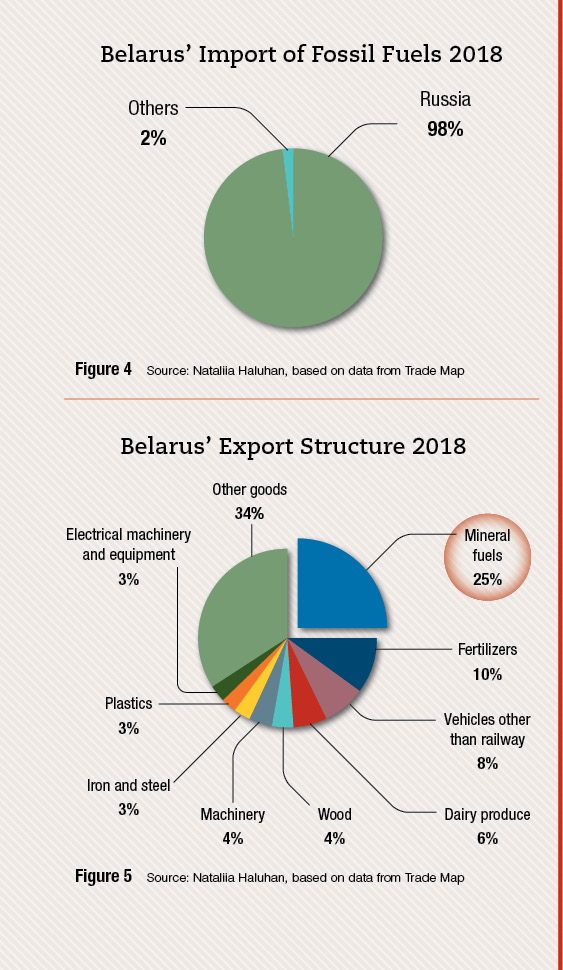 These patterns of steadily growing trade with China give Belarus the opportunity to diversify away from its overdependence on Russia and create the preconditions for further cooperation within China’s One Belt, One Road strategy, later renamed the Belt and Road Initiative. The ongoing instability in Ukraine has turned out to be an important Belarusian asset in this regard. Now Belarus to some extent can replace Ukraine as a partner to China, as it pursues participation in One Belt, One Road through both trade and wider collaborative projects, such as the bilateral Great Stone industrial park in Belarus.

Apart from the pursuit of new partnerships in the East, Belarus is also seeking new opportunities in the West. In 2018, Austria accounted for 8% of total FDI in Belarus and became its third-largest investor (Figure 8), almost doubling the volume of its investment from $600 million to $1.1 billion, compared to Russia, which decreased its share by roughly 60%.

Austria’s FDI in Belarus constitutes one-third of the EU’s total FDI without Cyprus and is expected to grow, as new projects relating to 5G communications networks have already been announced. Furthermore, Austria, as a neutral, non-NATO state and the biggest EU partner to Belarus, became the first EU country that Lukashenko visited in 2019 after a three-year hiatus in trips to the EU.

To sum up, Belarus’s foreign economic policy has sharply shifted in the direction of seeking new opportunities and new partners. Having applied its economic leverage to increase its political influence, Russia did not take into consideration the changing sentiments inside Belarus and the shifting attitudes outside it.

The Evolution of Narratives

The current state of Belarus’ foreign economic relations is turning the post-Soviet country into a battleground of narratives. An analysis of annual State of the Nation addresses by President Lukashenko to the Belarusian people from 2015 to 2019 (Table 1) clearly demonstrates how economic dependence, used as a political tool of influence, can shape strategic narratives inside the country. Both the topics mentioned and the frequency of the mentions indicate that Russia has been losing its political influence in Belarus since the Russia-Belarus dispute of 2016. In 2015, Russia was identified as the “main strategic partner” and was mentioned 35 times during Lukashenko’s address. In 2019, Russia was mentioned only 10 times and was rebranded as “a main ally.” By contrast, in 2015 Lukashenko noted a “comprehensive strategic partnership” with regard to China, but in 2019 China was referred to as “the most important strategic partner.” In addition, Belarus’ official attitude toward the EU was also cardinally changed, especially after the appearance of a “serious turning point” in bilateral relations in 2016, which can be considered a result of the escalation of the dispute between Russia and Belarus.

Changes to the official narratives reflect changes in public perception as well. According to a national poll conducted by the Institute of Sociology of the National Academy of Sciences of Belarus in 2019, citizens’ support for full independence for Belarus had grown by 14.9% since 2003, to 49.9%, while support for an equal alliance with Russia had decreased by 13.3% (Figure 9). Thus, half the country’s citizens believe that Belarus should be an independent state and build its relations with Russia based on international treaties (which could be classified as partnerships). At the same time, 36.1% believed that the two countries should cooperate within an equal alliance with the creation of supranational governing bodies (allied relations).

The results indicate that the increase of Russian economic pressure has significantly worsened both Belarusian official discourse and public opinion toward Russia. Against this background, Belarusian leadership is pursuing new economic partnerships through transformed strategic narratives.

Due to its post-Soviet heritage and its geography, Belarus is economically overdependent on Russia for both foreign trade and FDI. However, Belarusian economic stability and overall national security are especially vulnerable due to its extreme dependence on imported fossil fuels. Given Russia’s paternalist narratives and hegemonic aspirations, Belarus’ overdependence is being used to major political advantage by Russia. The Belarusian-Russian energy dispute of 2015-2016 is an example of the power of Russia’s assertive policies over its historic satellites.

However, its political victory in the dispute did not yield the long-term results Russia might have hoped for. Learning from the situation in Ukraine of the potential implications of Russian economic influence, Belarus made its move toward de facto independence during the next escalation of the conflict in 2018-2019. To reduce Russian influence and decrease Belarusian overdependence, Belarus’ leadership turned to both the West and the East in its search of new economic models of foreign cooperation. As a result, China appeared as one of Belarus’ main economic partners. Furthermore, official political discourse, backed by changing sentiments inside the country, mirrored economic changes. 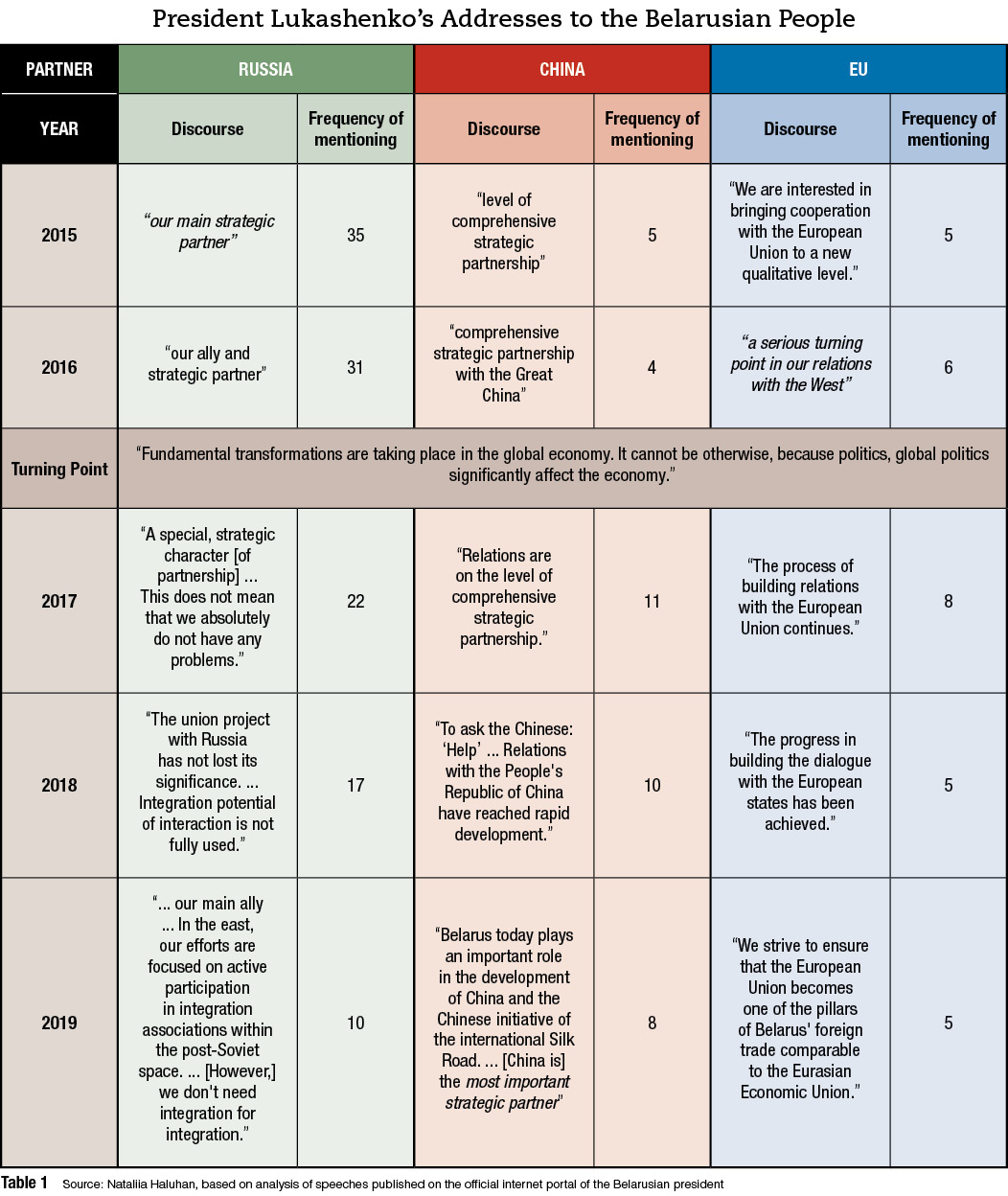 The perception in Belarus that Russia is the only, or even the most important, regional hegemon is rapidly changing despite (or even because of) the economic overdependence. At the same time, given its limitations as a smaller state, Belarus is seeking diversification and reorientation of its economy, rather than playing on its own. Its sharp shift toward an advanced partnership with another superpower, China, could provide the foundations for a broad restructuring of the balance of power in the region.

In the context of great power competition short of war, China provides Belarus a non-Russian, non-Western alternative partner, in effect limiting Russian leverage and forcing Moscow to take the interests of a “strategic partner” into account in its self-declared “sphere of privileged interest.” China has a mitigating impact on Russian militarization and other aggressive strategic behavior. These surprising circumstances have profound implications for the European security order. China and Russia may cooperate, but they also compete, and their interests are not always aligned or even compatible. This makes for a more complex strategic environment, but also potentially reduces escalatory tendencies.

Does Russia’s future Include China?